Cara Delevingne pulled all stops in sexiness as she arrived at the red carpet of the star-studded Met Gala on Monday night.

The 29 year-old model made a show out of her stunning outfit when she stripped off a red double-breasted jacket to unveil her bare chest and gold painted body.

The star covered her essentials with a pair of pasties. She accessorized with a dainty gold body chain to up the glam. 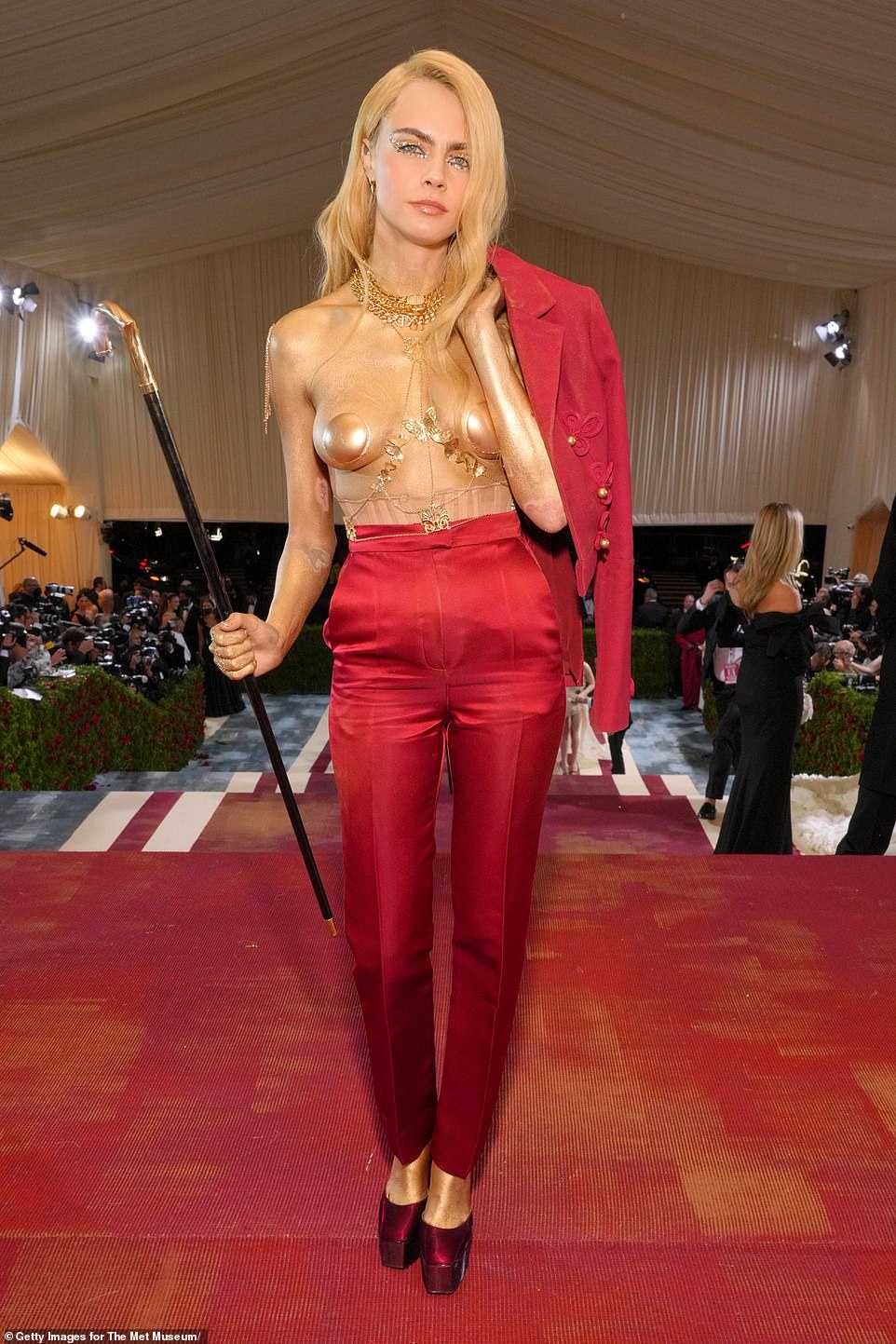 The catwalk queen also donned numerous gold chain choker necklaces around her neck. She also rocked a statement ring on one finger.

It is true that her look came with an unusual element of surprise. But Cara Delevingne radiated peak boldness. For some shots, she stuck her tongue out at photographers after going topless on the red carpet.

Meanwhile, Cara opted to let her lower half stay casual by sporting a pair of silky high-waisted red trousers that matched her jacket.

Cara carried the jacket in one hand as she held a black cane with a gold handle in the other.

She was painted gold all the way down to her feet

The covergirl parted her bright blonde hair to one side. She styled her beautiful tresses in loose waves that cascaded down her back and chest. She squeezed some locks behind her ear to display her interesting earrings.

Cara Delevingne walked around the lavish event in a pair of gorgeous red platform heels.

When it comes to makeup, Cara had several rhinestones glued to her eyes in a cateye shape. She also wore shimmery shadow swipes across her brown bone.

Delevingne’s lips were dipped in milky pink lip gloss. She accentuated her pale complexion with a cheerful pink blusher. 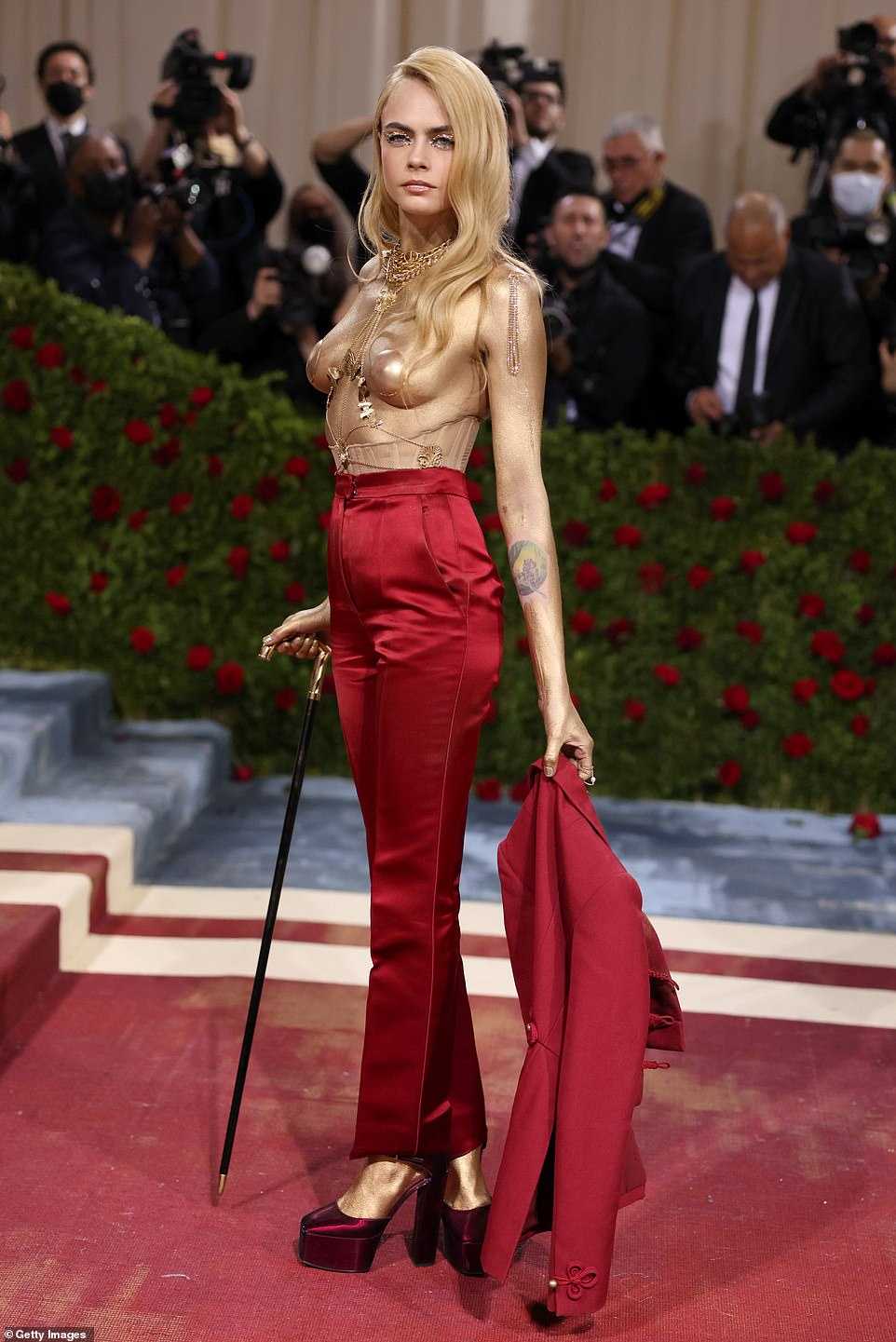 The covergirl’s bright blonde hair was parted to one side

The first glimpse of her Met Gala look was spotted when Cara Delevingne left her hotel in New York City ahead of the event.

Cara carried her cane in one hand. But she kept her show-stopping golden chest entirely concealed under her jacket. The only parts in view were her painted hands and the tips of her feet.

Cara spent some sweet time indulging with her fans in the hotel premises. She posed for the photographers for some shots ahead of her red carpet appearance.

Cara Delevingne has stormed the Met Gala red carpet ever since her debut in 2011. And the star never disappoints.

The Metropolitan Museum of Art Costume Institute Benefit, also known as the Met Gala, is the celebrity equivalent of the Super Bowl.

The star-studded fashion night is held the first Monday in May to raise money for the Costume Institute in New York City. Except for last year, when it was postponed to September due to the pandemic. 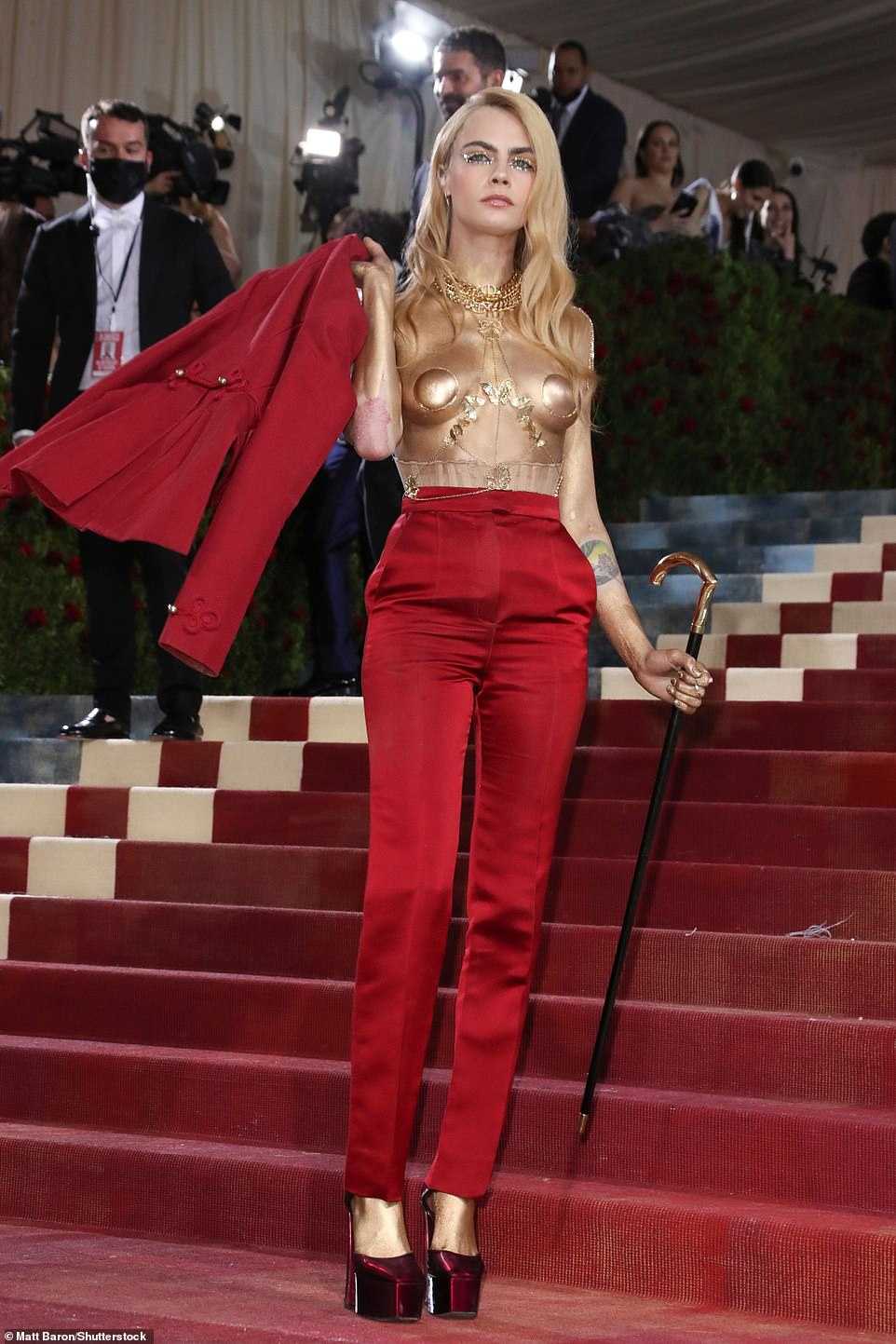 Her lips were doused in milky pink lip gloss

Regina King, power couple Blake Lively and Ryan Reynolds, and Lin-Manuel Miranda are hosting this time. They will take over from Timothée Chalamet, Billie Eilish, Amanda Gorman and Naomi Osaka.

Vogue editor-in-chief Anna Wintour is once again supervising the benefit as chairwoman, a position she’s held since 1995. Her fellow honorary co-chairs are designer Tom Ford and Instagram head Adam Mosseri. 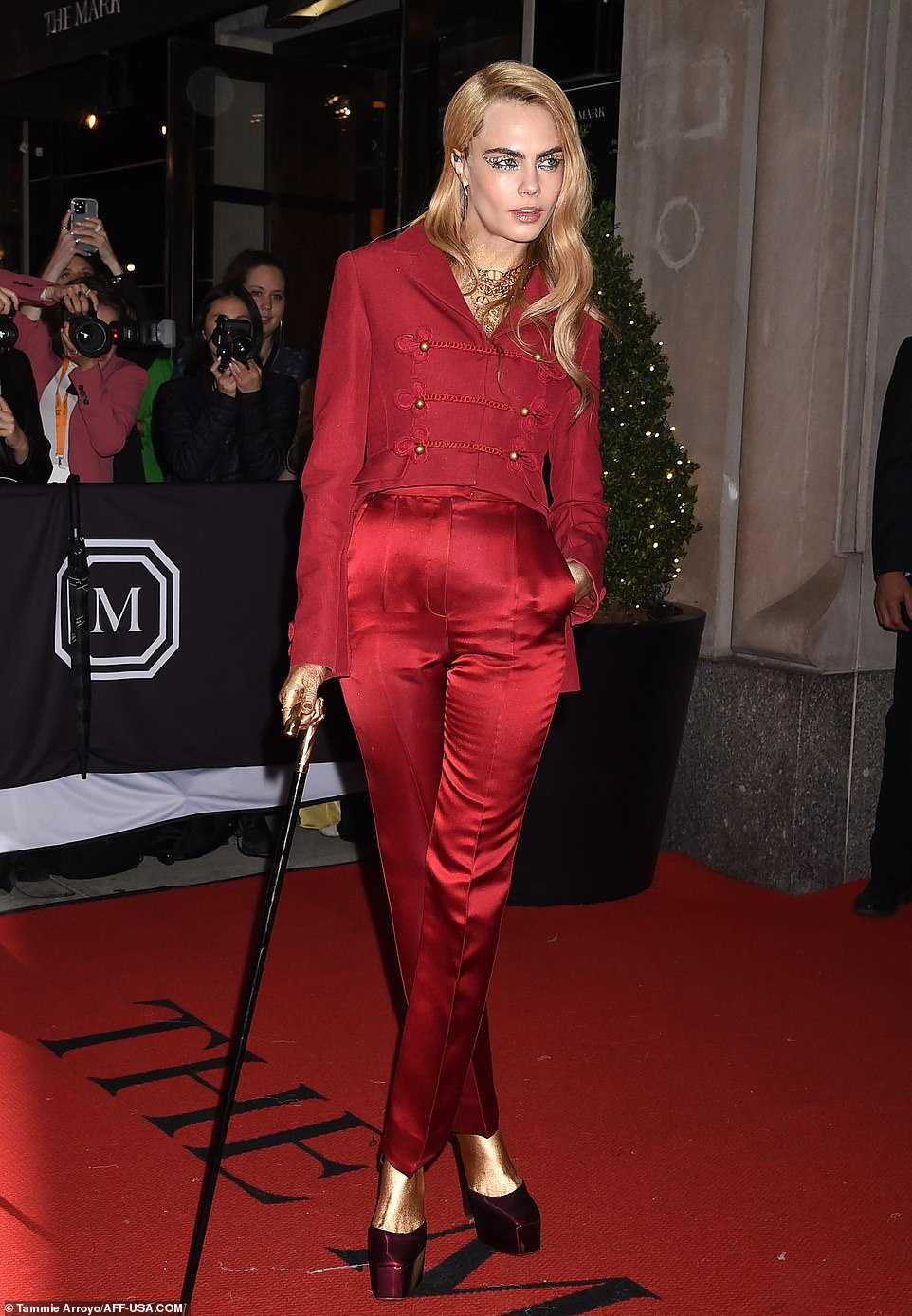 The event will display some budding designers, as well as some top film directors. The names include Sofia Coppola, Martin Scorsese, host King, and last year’s Oscar winner Chloé Zhao.

Like September, this year there will be 400 guests too. Which is lower than the pre-pandemic highs of 500-600 attendees. 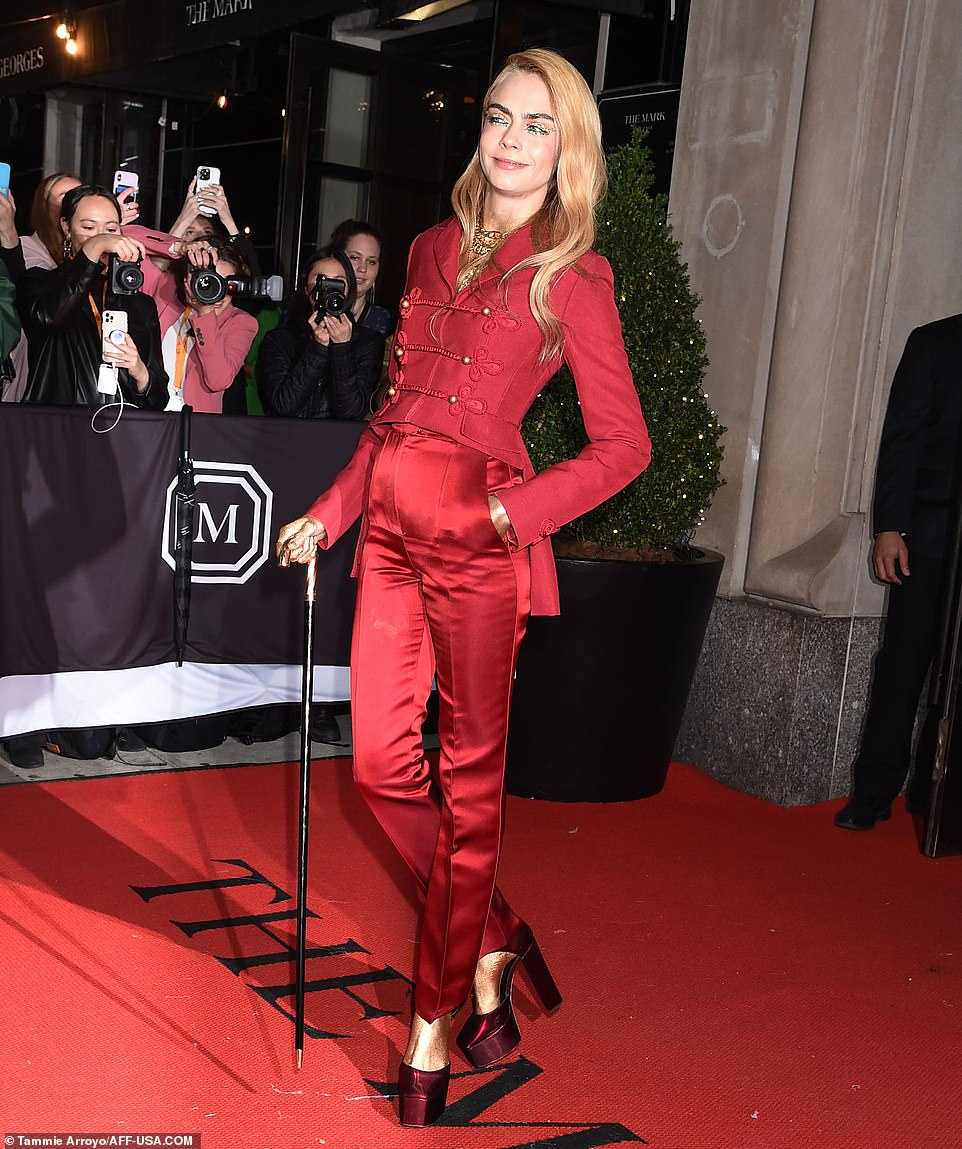