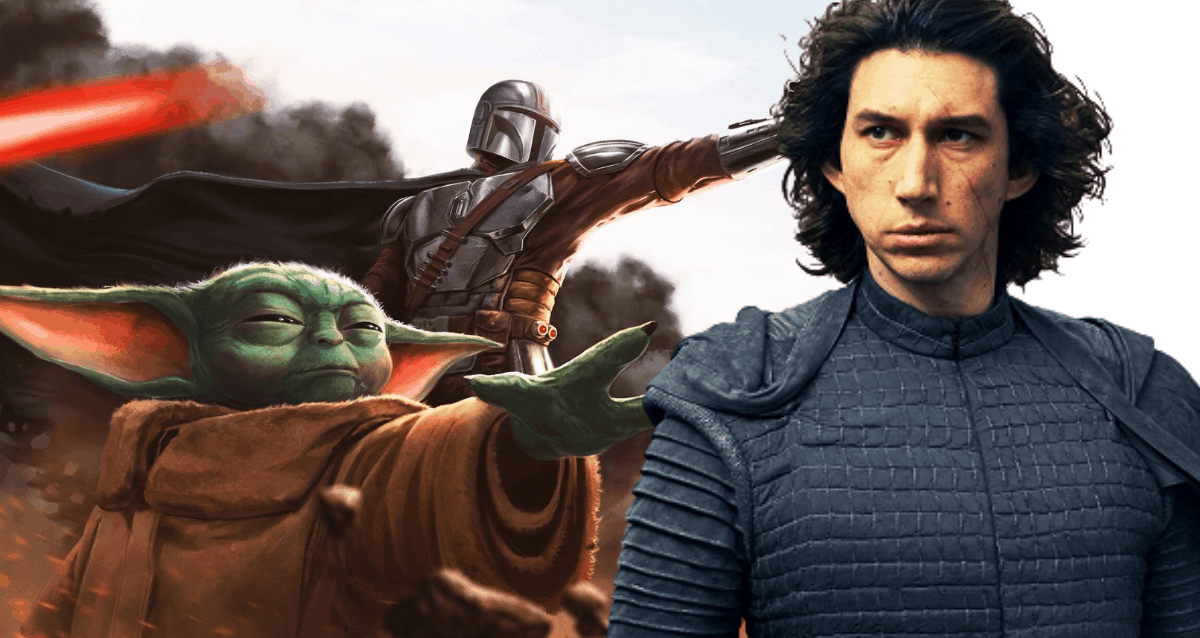 The Mandalorian is undoubtedly one of the most popular Star Wars Disney+ series in the world. It won’t be wrong to say that it’s a pop culture phenomenon.

Right now, season 3 has reportedly begun production and is slated for a Spring 2022 release. Anticipation is high for season 3 after the thrilling finale of the second season.

We saw in the season two finale that Luke Skywalker took Grogu away to complete his Jedi training. So for now, Din Djarin and Grogu are separated, and it’s not certain whether they will even meet in season 3.

As a result, there are a lot of theories and questions going around right now about what season 3 could be about. One theory states that The Mandalorian might be building towards Din Djarin giving up his life to protect Grogu from Kylo Ren.

Now, you might be asking- why and how can this happen? Here we will talk about that.

Fans or even casual viewers of the Star Wars Sequel Trilogy will be aware of the reason why Grogu’s life might be in grave danger. Right now, The Child is a student at Luke Skywalker’s small and fledgling Jedi academy.

There he will meet a boy named Ben Solo sometime in the future. And therein lies the problem.

After all, it was revealed in The Last Jedi that Luke had felt a malicious and sinister force brewing while he was training his nephew. And due to this, he considered executing Ben. Now, Luke did realize his mistake. But that was too late, and Ben had seen enough.

So Leia and Han’s son incapacitated his uncle and massacred other students. Those he didn’t massacre, he recruited. Thus, began his transformation into Kylo Ren began. This brings us to an important question- did Grogu know about the Skywalker family drama or history?

How Can The Mandalorian Show This Massacre? 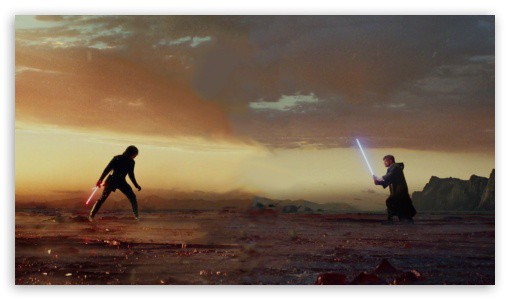 Now, it’s very possible that The Mandalorian might depict the Kylo Ren incident. And there are a lot of ways the show can go about showing this significant incident.

For example, one way of showing it would be to show that Grogu has abandoned his Jedi training way before Ben’s tantrum. Or it’s possible that he would have slipped out of the backdoor as he did during Order 66.

However, it’s also possible that the reason Grogu gets saved is because of Din Djarin, the Mandalorian himself. After all, given the strong bond between them, it may be Mando who ends up saving him.

How? Let’s discuss that.

Know that The Mandalorian season 2 occurs after 9ABY. But the Ben Solo massacre occurs about 19 years later. As such, this means that any battle between Din Djarin and Kylo Ren is still about 2 decades away as per The Mandalorian’s timeline.

As such, if the show does go this route, then they would have to pull off quite a hefty time jump convincingly. However, that just might be where The Mandalorian as a show is headed. 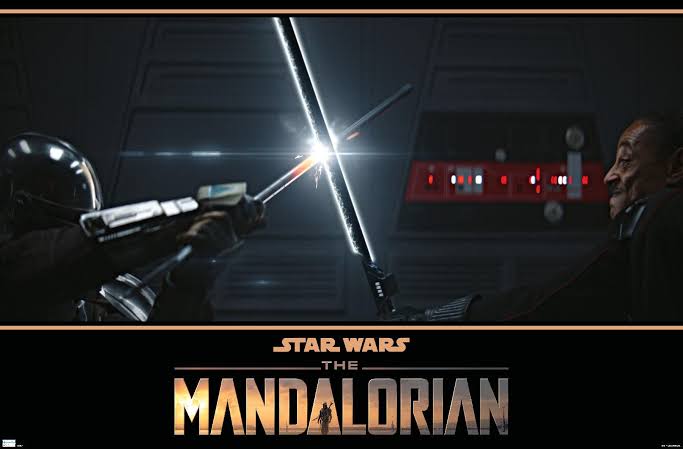 Right now, Din Djarin has defeated Moff Gideon and has become the official owner of the Darksaber. So technically, he is the rightful ruler of Mandalore. However, someone isn’t quite happy with this development, and that someone is Bo-Katan Kryze.

Also, along with this, The Mandalorian has yet to explore another event known as the “Great Purge ” during this Gideon took the Darksaber, and Din had to settle a score with his old clan. This was because, this clan that he was a part of since he was a child, was actually an extremist group that raised him on lies and hardship.

So when the show will explore this aspect, then it will certainly be interesting to see. However, it should be kept in mind that in this storyline, Grogu will have just no involvement whatsoever.

As for Grogu, he will obviously be undergoing training in the Jedi academy with Luke and as per the new poster, he might be using a lightsaber as well. Now, showrunner Dave Filoni has teased a lot of Force-based exciting action for The Mandalorian season 3.

This means that fans will probably get to see Grogu and Luke training together and training hard at the academy. There Grogu will obviously be developing his Force powers as Din Djarin might reluctantly rule over Mandalore.

As a result, it’s possible that the duo might stay apart for 19 years due to this. And the future seasons might explore this in full.

Why Grogu Might Be The Only One Who Gets Saved? 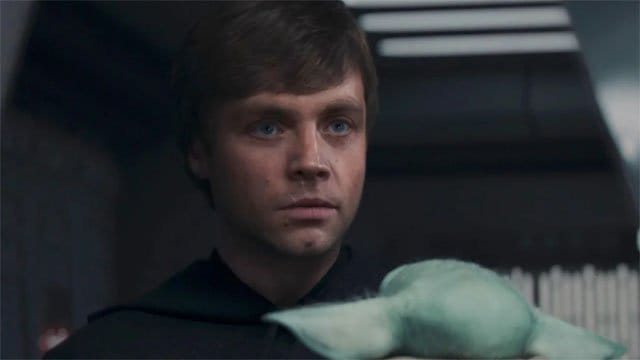 In The Last Jedi, Luke Skywalker explained Kylo Ren’s origins to Rey. He revealed that he had long sensed a darkness within Kylo, but he was too late in realizing the fact that Supreme Leader Snoke had gradually corrupted his nephew from afar.

However, Luke doesn’t reveal what he did to safeguard the other students from this evil.

Moreover, even running away wouldn’t have been an option for most students anyway. After all, the Jedi code says that the students must abandon all kinds of attachments.

So Luke would sooner place his students in mortal peril than send them back to their respective families. However, Luke may just make an exception in Grogu’s case.

When the Jedi Master shows up in the season 2 finale of The Mandalorian, he promises Din Djarin that he will keep Grogu safe. He says:

“I will give my life to protect the child, but he will not be safe unless he masters his abilities.”

So once Luke senses the darkness within Ben, he would probably begin doubting whether he can even keep that promise. This might compel him to use those Force projections to talk to Din Djarin.
As such, he would be able to warn Mando about the harm that’s about to come in Grogu’s way.

Apart from warning Din Djarin about the potential danger to Grogu’s life, it would also establish how the master Skywalker was able to learn this Force projection trick ahead of The Last Jedi.

Not to mention the fact that making contact with Mando would add a moral twist to Luke’s interpretation of the Jedi teachings. This is because, in the Star Wars sequel trilogy, Luke learns how he had basically made the very same draconian mistakes that his Jedi predecessors had made.

So this means that he too had banned attachments, encouraged unquestioning obedience, and more. As such, when he deviates from the Jedi code to warn Din Djarin of Grogu possible danger, then it would prove that Luke didn’t just mindlessly follow the teachings of old.

It would instead show that he continued the Jedi legacy in a new way- he broke rules and in the process, was at least able to save one student. Now, on the other side, Mando would surely be unable to ignore luke Skywalker’s warnings.

Mando Would Have Rescued Grogu 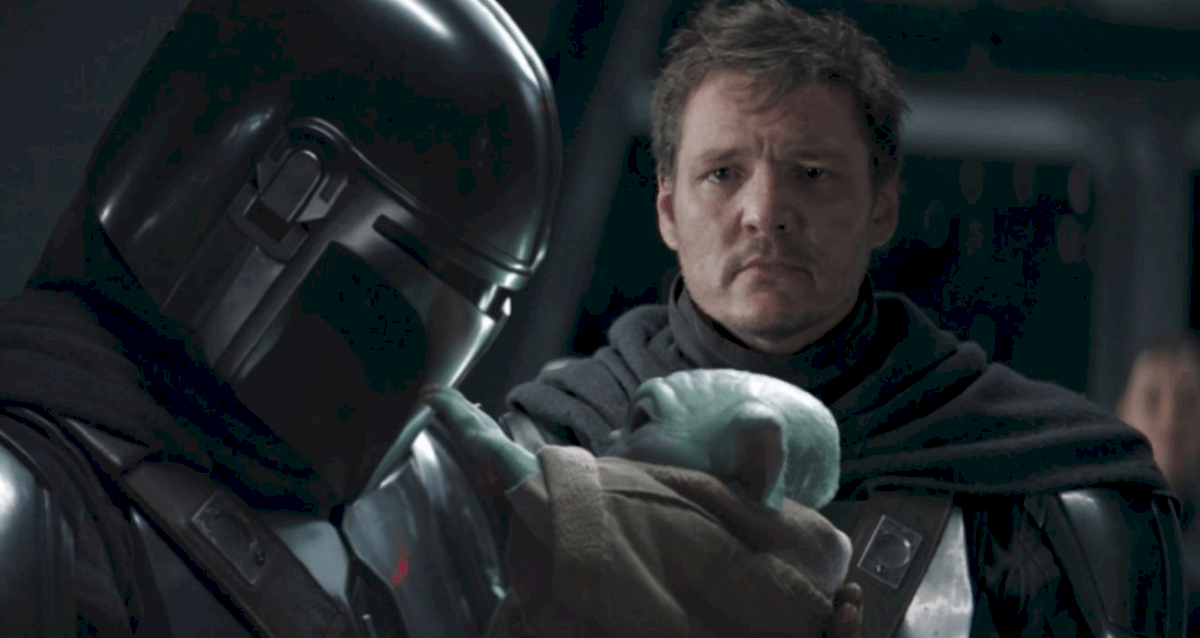 After all, Din Djarin does love Grogu. Also, it needs to be noted that after a period of about 2 decades, he would have become a seasoned warrior. And as a result, he would have made his way to the Jedi temple to fulfill his very own promise from the season two finale of The Mandalorian.

Back then, he had said that he and Grogu would meet again.
To keep this promise, he would go to the temple to save Grogu. Djarin would probably show up at the academy when Ben’s rampage would just be starting.

He would see Luke getting crushed by falling rubble, all due to Kylo Ren. Then, as Ren would start his murder spree, Mando would probably locate Grogu, and the pair would connect after years.

But this would probably be for a brief minute before Mando has to run with Grogu in the ship he came in. He would probably hit autopilot and then face Kylo Ren while wielding the beskar spear that he received back during The Mandalorian season 2.

However, it would probably be a fight that wouldn’t be in Mando’s favor.

Din Djarin Would Probably Die In The Fight 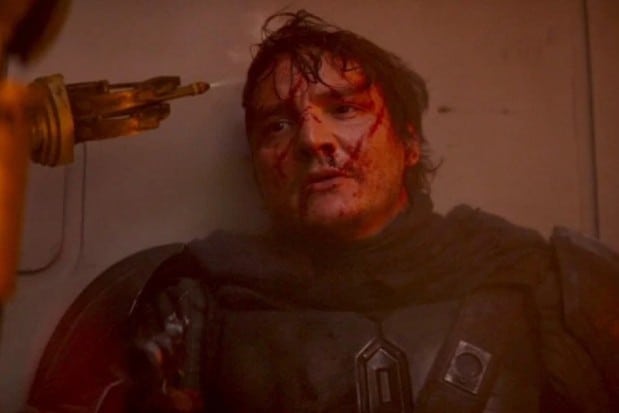 After all, facing a prodigious and formidable Force user as well as his future “Knights of Ren” acolyte is tough, even for a seasoned warrior. So Din would probably lose the battle. But it would certainly be an epic last stand, and he would go down in a blaze of glory.

In doing so, he would have successfully stalled Kylo Ren’s rampage and given Grogu enough time to escape the planet and disappear into space, away from the massacre of the maniac Kylo Ren.

Grogu, on the other hand, would obviously be forlorn as he would watch someone who was basically like a father to him perish just to save him. He would be able to watch it all through the window of Mando’s moving ship.

He would watch as the burning and bloody temple would get smaller and smaller as he would fly into the unknown. 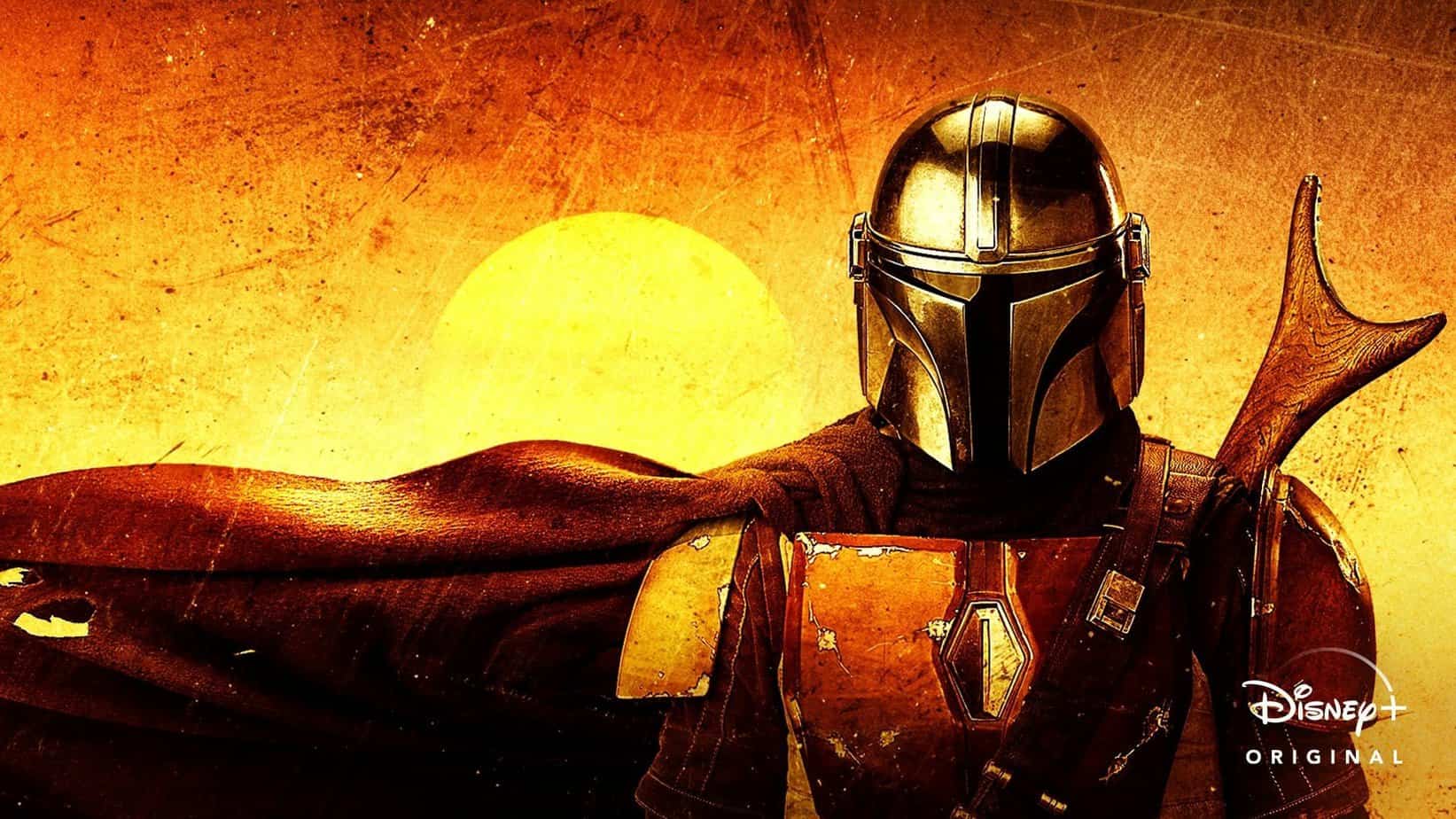 When The Mandalorian first aired, not many expected a story about a bounty hunter to be a moving tale on fatherhood. After all, dads in Star Wars don’t really have the best track record. So Mando is quite an exception in here.

Over two seasons, we have seen Din Djarin and Grogu’s relationship deepen and become the core of the series. Now, The Mandalorian season 3 may separate Baby Yoda and Mando for now, at least. But it’s quite clear that their fates remain intertwined.

We should make it clear, that no one really expects a happily ever after complete with rainbows and puppies in the world of The Mandalorian. Viewers know that this world is full of villainy and scum. As such, it’s possible that one of the main duo has to perish.

Now, killing Grogu would break people’s hearts, and in some ways, it would end up being an unnecessary death. But with Mando, that’s not the case. Seeing how much he loves Grogu, it won’t be out of the blue to see him give his life for Baby Yoda. 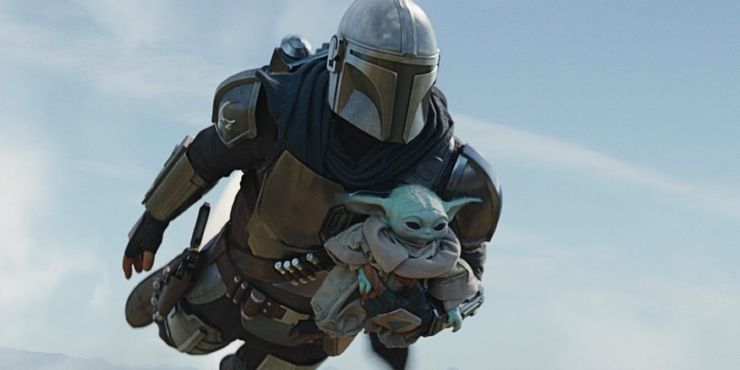 Also, it’s quite natural to see a father give up his life for his son. Din Djarin showing up at the last minute to save his son would be a great thematic conclusion of The Mandalorian. Moreover, it would neatly bridge the gap between Disney+ and the Star Wars sequel trilogy.

Also, we need to talk about the other side of this battle between Din Djarin and Kylo Ren (if it does happen). Know that defeating an experienced warrior like Din Djarin would ensure that Kylo Ren looks like a formidable Star Wars villain.

Not to mention that Grogu getting sent into space would allow him to show up in future stories. Now, after the fight, when Luke would wake up, he would possibly find the lifeless body of Din Djarin.

Then perhaps all he can do is optimistically hope that Grogu was able to escape from the burden of the Jedi. This would also help explain Grogu’s absence in the sequels.

Overall, a Mandalorian bounty hunter dying to protect a Jedi is a great tragic ending for The Mandalorian. But Grogu’s survival would end the season/series on an optimistic note.

This combination is something which the show has used in the finales of its two seasons till now. Also, not to mention the fact that fans wouldn’t be able to stop their tears with this ending.

But the question, as always is- will the show take this path? That remains to be seen in season 3 and beyond. But for now, you can stream the two seasons of The Mandalorian on Disney+.