Five Kang Variants Most Likely To Appear In The Multiverse Saga

Just a few days ago, Kevin Feige dropped the nuke. He announced their plans for Phase 4, 5, and 6 (hereon called – The Multiverse Saga) at SDCC 2022. It has now been very obvious where the MCU is heading next. The next Thanos is none other than – Kang. Kang is a time-traveling entity whose many variants have appeared in the Marvel comics in the past. These variants (different copies in different universes and timelines) of him have frequently fought with Avengers and Fantastic Four.

Who exactly is Kang?

Kang first appeared as its variant Rama-Tut in Fantastic Four #19 (1963) and was created by Stan Lee and Jack Kirby. His various abilities include – Time Travel, Enhanced strength, High intellect, skilled combatant, possesses advanced technology and weaponry. Kang is also sometimes backed by an army of potentially trillions of soldiers from all across time and space, which he has often employed against his enemies. However, in the current timeline of the Marvel Cinematic Universe (MCU), the character first appeared as He Who Remains. It was played by the brilliant Jonathan Majors in the last episode of the Disney+ show Loki. But this variant was “one of the good ones”. And as He Who Remains himself says this about his variants,

And if you think I am evil, well… wait, just wait till you meet my variants.

Various Kang variants have often fought with each other, citing their own dominance. This has led to many wars and battles among them. These feuds have gone for decades and centuries. And this will probably make the plot of the upcoming Avengers: The Kang Dynasty (2025) and Avengers: Secret Wars (2025). So, here we attempt to list five of his variants that are most likely to appear in the current ongoing The Multiverse Saga. The list is arranged in the most likely order that they may appear in MCU in the future. 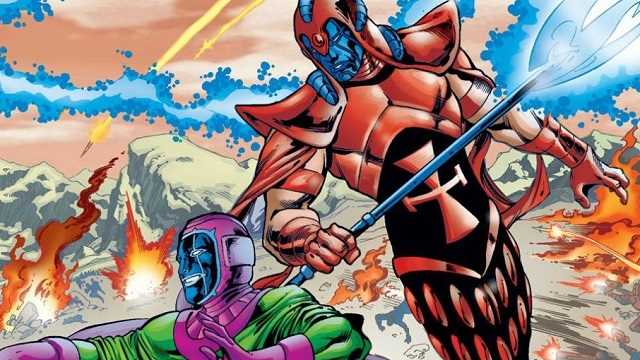 Scarlet Centurion fighting along with Kang in the comics

In the comics, when Rama-Tut aka Nathaniel Richards is caught in a time storm, he appears in the current Marvel comics timeline and assumes an identity similar to Doom. This gave birth to the Scarlet Centurion. Nathaniel Richards is also a successor of Doctor Doom. So, in the comics when he meets Doom, he decided to work alongside him against Avengers. This time he attained the identity of Scarlet Centurion. He first made his appearance in the Avengers Annual #2 (1968).

Rama-Tut in the comics

A Kang variant who lived in ancient Egypt, Rama-Tut becomes Pharaoh by using his technology to seize the country. He is actually the identity adopted by Nataniel Richards when he travels to the time of ancient Egypt and attempts to establish his own rule. This has even brought him face-to-face with Khonshu (Egyptian Moon God, already appeared in Moon Knight). He traveled through time in a flying pyramid. MCU could give a subtle nod to this variant by visiting a story in the past.

Iron Lad in the comics

Born in the 30th century as Nathaniel “Nate” Richards, this Kang variant is a descendent of Reed Richards (Mr. Fantastic). He is likely the variant who found out about the existence of his other variants in the multiverse, as told by He Who Remains in the Loki season 1 finale. Nate mainly is in his adolescent form and wears a bio-metal suit, that he designed after Iron Man technology and calls himself the Iron Lad. In the comics, he is visited by his future evil self Kang, who takes him through time. However, instead of getting inspired, Nate is disgusted with himself. He then proceeds to join and help Avengers in their adventures. He even develops a romantic relationship with fellow Young Avenger teammate Cassie “Stature” Lang. 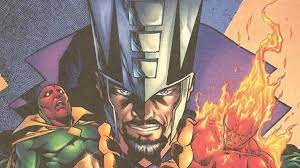 Immortus in the comics

One of the most powerful variants of Kang is Immortus. A much older version of Kang, Immortus has often run afoul of both the Fantastic Four and the Avengers. An agent of the Time-Keepers, he is also the last living being of the Marvel Universe in his timeline. He is tasked with maintaining the integrity of the timeline, something he’s often taken harsh and downright villainous tactics to pursue. This is the variant that appears to have been adapted as the ‘He Who Remains‘ into the MCU. He lives in the Citadel at the End of Time and is the ruler of the Time Variance Authority (TVA). But, he is killed by Sylvie Laufeydottir, a female variant of Loki in the last episode of the series. Interestingly, the character of ‘He Who Remains’ is not a Kang variant in Marvel comics.

Kang, the Conqueror in the comics

MCU will most likely use Kang, the Conqueror variant as the main antagonist. In the comics, however, the 30th century Nathaniel Richards becomes eventually the “Prime Kang”. Instead in MCU, he likely will be simplified a bit and will be closer to the origin that ‘He Who Remains’ revealed in Loki. In that case, Kang will be a brilliant inventor and power-hungry conqueror from the distant future who sets his sights on ruling a single universe, multiple universes, or even an entire multiverse.

Kang is all set to appear in 2023’s Ant-Man and the Wasp: Quantumania. A variant of him may also appear in Loki season 2.