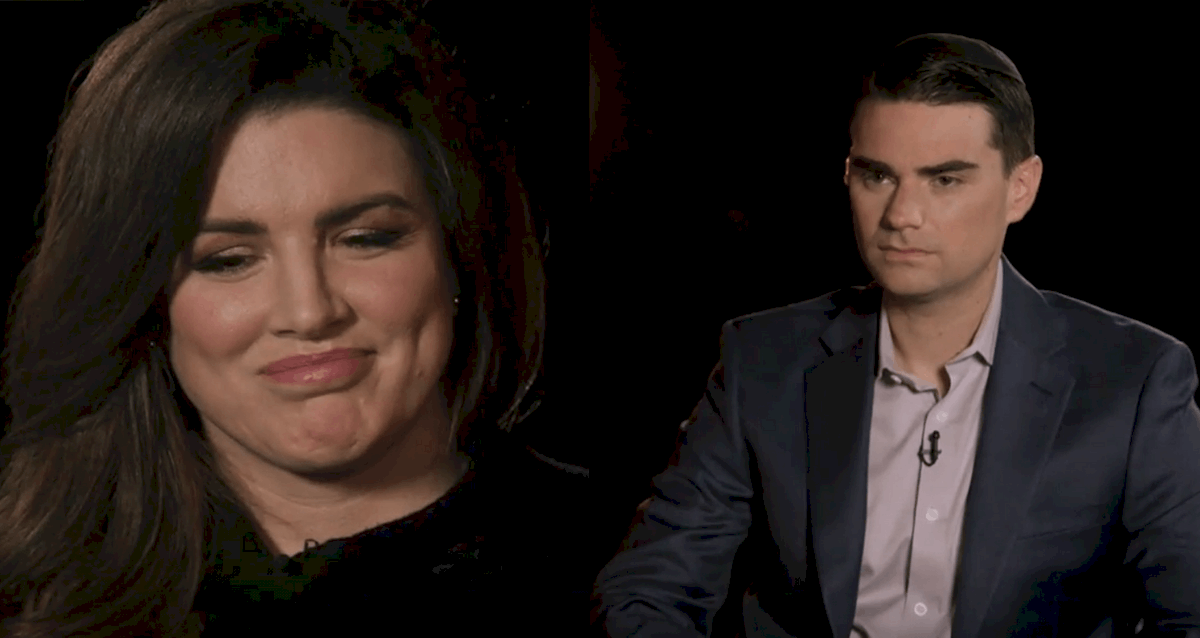 Gina Carano got fired from Mandalorian by Disney last week and its the first time she did a sit-down interview with The Daily Wire’s Ben Shapiro.

Gina Carano will express her feeling in the interview with The Daily Wire’s Ben Shapiro. The interview is due to air on Sunday.

“I’ve been through so much, and I’ve seen so much now, clearly, of the bullying that’s been taking place, and I saw it before,”

Gina Carano will tell Shapiro with whom she has a new movie deal.

“I’m not the only one that’s ever been bullied by this company, and I know that so deeply,”

“I could share a story which would turn things around in the media but I can’t because it would sell out a friend…Everyone is afraid of losing their job.”

Gina Carano played the role of the famous bounty hunter Cara Dune in the first two seasons of the Mandalorian.

“You know how boxers head-hunt sometimes and forget to go for the body? I feel like Disney or Lucasfilm or whoever it is, just certain people at that company…I feel like I’ve been being head-hunted (…) and you can feel it. Just a couple of weeks ago, Lucasfilm asked an artist that they employ to erase my character and put a different character in place, and he proudly announces this on Twitter, and erases my character and puts another character in place. All the fans of Cara Dune were just outraged. They were like ‘Why didn’t you add the character? Why did you have to take off the character? Is there something wrong? Is Gina getting fired?”

She also revealed that she came to know about the firing just like everyone else through social media.

“How I found out was that I looked on the internet, and you know, you check your Twitter and I’m trending and the ‘fire Gina Carano’ hashtag worked.”

She also revealed that she got an email by accident from Disney staff following the social media post.

“They accidentally sent me an email, which was very enlightening, so I knew. I knew they were paying attention. I know there were some people who went to bat for me, but I know that they didn’t win out at the end.”

She agreed with Shapiro that there were double-standards by the studio based on the political affiliation.

“They’ve been all over me and they’ve been watching me like a hawk, and I’m watching people on the same production and they can say everything they want, and that’s where I had a problem. I had a problem because I wasn’t going along with the narrative… “

She expressed that she didn’t want to hold back her opinion on social media.

“I was prepared at any point to be let go, because I’ve seen this happen to so many people. I’ve seen the looks on their faces. I’ve seen the bullying that takes place, and so when this started, they point their guns at you, and you know it’s only a matter of time. I’ve seen it happen to so many people, and I just thought to myself (…) ‘you’re coming for me, I know you are.’ ” They’re making it very obvious through their employees who were coming for me, and so I was like, ‘I’m going to go down swinging and I’m going to stay true to myself.’ “

She tells Shapiro at another point:

“When you called, my body is still shaking. It’s devastating, but the thought of this happening to anybody else, especially to somebody who could not handle this the way I can, no, they don’t get to do that. They don’t get to make people feel like that (….) and if I buckle, it’ll make it okay for these companies, who have a history of lying, to be lying and to do this to other people, and they’ve done it to other people, and I’m not going down without a fight.”

She had posted numerous controversial posts on social media in the past related to masks, gender pronouns and mail-in votes.

Some posts were scrubbed from the actress’s Instagram, but others picked them up and reposted them.