Henry Cavill Could Sport The Look Of These 5 Marvel Characters

British actor Henry Cavill, who was once known as Superman, is now ruling the industry as Geralt of Rivia. Cavill played Superman in the DC Extended Universe, with a debut solo film “Man of Steel” (2013). He also appeared in “Batman v Superman: Dawn of Justice,” (2016) “Justice League” (2017) and “Zack Snyder’s Justice League” (2021). While his contract with DC has been terminated, Henry could just make a comeback as another superhero.

Apparently, the MCU and DCEU have shared their actors and characters before. Idris Elba has portrayed Heimdall in “Thor” and Bloodsport in “The Suicide Squad.” Ryan Reynolds has played Green Lantern and Deadpool in their respective films. Even J.K. Simmons has played Jonah Jameson in the Spiderverse and Jim Gordon in Justice League. And Henry Cavill could do the same.

Henry Cavill could play a number of Marvel heroes. And we have narrowed down the prospectus to five characters.

Ever since Henry Cavill heard about Netflix making their own version of The Witcher, he followed the show’s audition process, and ultimately won the role of Geralt of Rivia. When it comes to the MCU, Henry Cavill has casually mentioned his inclination towards playing Captain Britain. In an interview held in November 2021 with The Hollywood Reporter, he said:

“I’m never going to say a Marvel character that is already being played by someone else because everyone’s doing such an amazing job However, I have the internet and I have seen the various rumors about Captain Britain and that would be loads of fun to do a cool, modernized version of that — like the way they modernized Captain America. There’s something fun about that, and I do love being British.”

Captain Britain, also known as Dr. Brian Braddock, receives his superhuman powers from the Amulet of Might. The ancient artifact grants him unbelievable strength,  flight shooting energy beams  as well as creating force fields. Initially, Marvel Comics intended the character to solely focus on the British market. But Captain Britain soon became popular with the American audience. He made several team appearances with Illuminati and Secret Avengers.

Captain Britain’s narratives usually involve magic. The MCU Phase Four is currently experimenting with the Multiverse. Marvel has recently introduced characters like Dane Whiteman, also known as Black Knight and Blade through Chloé Zhao’s Eternals. So it is most likely that Henry Cavill will soon bag the role.

While  Warner Bros. has expressed no intentions of renewing Man of Steel for a sequel, Henry Cavill has always been dedicated towards his role as Superman. The actor understands that his hero still has plenty of room to explore. However, while the DC project is on hold, Cavill could suit up as the MCU’s Superman.

Hyperion possesses the ability to contain cosmic energy, along with powers like super speed and flight. He obtains his energy from the sun. If fleshed out, Hyperion could become one of Marvel’s greatest dangers. In addition, he is also involved with a Justice League-esque team named Squadron Supreme. Paired with Cavill’s towering personality, and a new cape, Hyperion would be a great inclusion into Marvel’s fold.

Also Read : Henry Cavill Recently Had Talks With Marvel About Joining The MCU 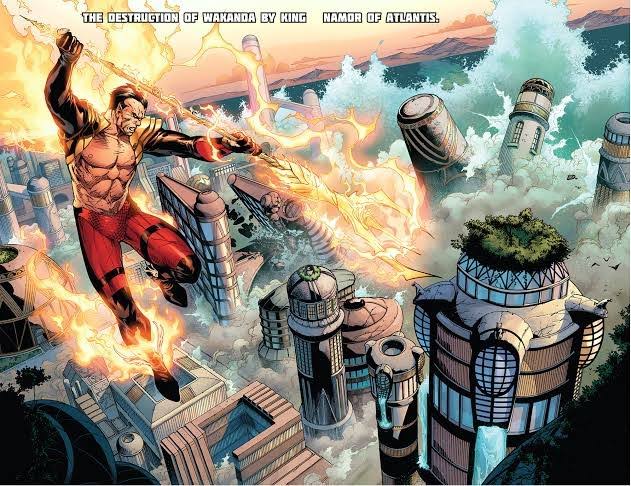 Simply put, Namor/Sub-Mariner is Marvel’s version of Aquaman. Avengers: Endgame cleverly dropped a Namor hint when Okoye and Natasha Romanoff discuss seismic activity coming from beneath the ocean. Namor has incredibly sharp powers of speed and agility. And time has it that Marvel has spent over a decade exploring intergalactic characters. It is only a matter of time before the MCU dives into the ocean. Not only has the character been teased recently in Marvel’s content, Henry Cavill would be a brilliant choice to play the character.

Falling second in line to One-Above-All, The Beyonder is believed to be the strongest being in the Multiverse. He is endowed with power that succeeds that of all Cosmic Entities. The original comics portray him as a formidable antagonist who could manipulate reality. Because of his psionic abilities, he can read minds, tamper with people’s memories, as well as obtain information from across the Multiverse. In essence, he is invincible. Henry Cavill’s broad, muscular physique compliments The Beyonder’s tall, intimidating personality. This makes the actor a perfect fit for the God-like being.

Marvel’s Sentry is another take on Superman. He contains the powers of a million exploding suns. Apparently, the character swallows a Super-Soldier serum that “moves his molecules an instant ahead of the current timeline.” This ability allows him to tackle bullets with ease. He can also travel to the sun and back in a matter of minutes. Sentry is indestructible. Not even Spider-Woman’s venom blasts caused him any harm. The character appears as various versions of himself. Some include Robert “Bob” Reynolds, who captures people’s hearts, and a sinister version known as The Void. The character sports a belt adorned with an “S”, as a tribute to Superman. Who could have been better than Henry Cavill to take on the role?