Sony and Marvel Studios Spider-Man: No Way Home is dominating the box office. The movie is a tribute and love letter to the almost 20-year film history of live-action Spider-Man movies led by Tobey Maguire, Andrew Garfield, and Tom Holland.

Not to mention the fact that it is also a great reminder of Peter Parker’s famous line, “With great power comes great responsibility.” Spider-Man’s greatest enemies from across the multiverse get transported to the main MCU to cause trouble after a spell gets miscast by Strange, and they test his commitment to power and responsibility.

From then on, it’s not up to one but three Peter Parkers to stop them. Of course, people who have watched No Way Home will know that Andrew Garfield and Tobey Maguire’s Spidermen appear in the movie from their respective universes.

Theaters roared when the two showed up on screen. Thankfully, even though fans suspected their involvement long before release, the fact that no official confirmation was given helped keep the surprise under wraps.

Now, fans weren’t the only ones kept in the dark. 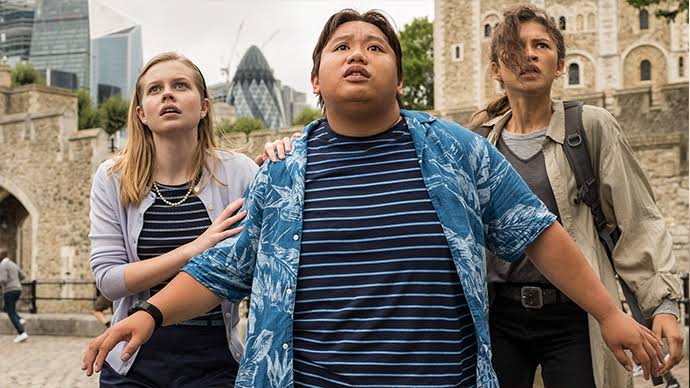 In an interview with The Hollywood Reporter, actor Angourie Rice, who plays Peter Parker’s classmate Betty Brant in the MCU, spoke about her role in Spider-Man: No Way Home.

She revealed that she wasn’t told about the various surprises the movie had in store. Even though she got to read the script for Spider-Man: Far From Home, Rice confirmed that she only got sides for the filming for No Way Home.

Sides are pages of a script, shot on a particular day of filming. She said that:

“I got to read the script on [Spider-Man: Far From Home]. They’re very secretive about everything, which is fair.”

Rice then said that she invited her friend who knew about all the No Way Home fan theories to a screening of the movie. She said:

“I’m not on the Marvel side of the Internet as much as superfans are. I have a friend who’s a superfan and I would just find out stuff from him. He would text me and say, ‘Is this true?’ And I would be like, ‘Honestly, I don’t know. Stop asking me!’ (Laughs.) I actually took him to the Melbourne screening, and he knew more than me, going into it. He was like, ‘I’ve been on all the fan sites, I know all the theories.’ (Laughs.)”

Apart from this, Rice praised her experience watching the movie as just a fan. She said:

“I loved the performances and I loved the VFX. The VFX are one of the coolest things about seeing anything Marvel or superhero. You can see the real people doing the stunts on set, but when you see how much work goes into creating a whole world, digitally, after everyone wraps, the visual spectacle of it all is just so exciting. “

The No Way Home actor also said that watching the audience’s reactions was the best part of the screening. As per her:

“At the screening here in Melbourne, there were a bunch of fans and press people, and one of my favorite things about seeing it was hearing the audience’s reactions. It was like seeing a live theater performance or a musical. Everyone was applauding and screaming and getting into it, so that was really fun.”

Marvel And Sony’s Intense Secret-Keeping Have Paid Off

Marvel and Sony succeeded in keeping Tobey and Andrew a secret

As we said in the beginning, No Way Home is smashing box-office records. Everyone who has seen the movie is praising it. Getting both critical acclaim along with box-office results is no mean feat.

Garfield’s and Maguire’s Peter Parkers enter the movie just shortly before the climactic battle. Yet they are still an integral part of the plot and not mere cameos as many predicted.

Overall, it was an incredible experience watching the three Spider-Men swing into action all at the same time. The studio, cast, and crew must be given credit since they ultimately successfully kept Maguire and Garfield’s inclusion a secret from fans.

This helped preserve the surprise and make their first appearance in the MCU something truly special.

Spider-Man: No Way Home is now playing in theaters around the world.

You might also like: Spider-Man: No Way Home Writers Talk About Andrew Garfield’s Involvement In The Script