House Of The Dragon: How Durable Are Dragon Eggs? 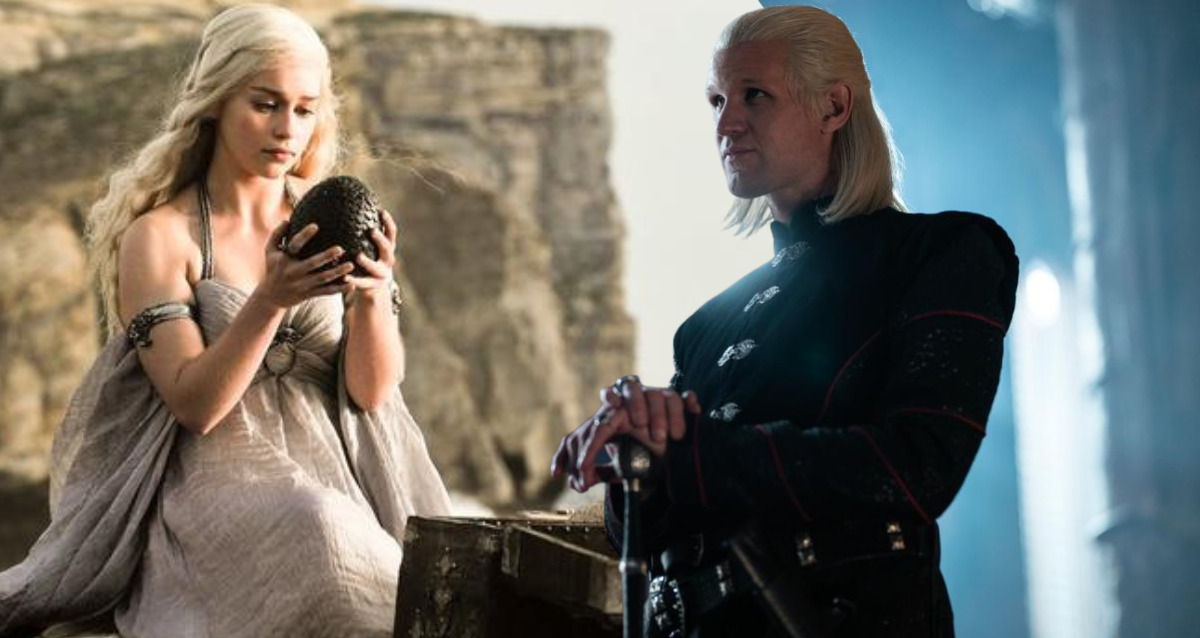 Both Game of Thrones and House of the Dragon have given us a good look at Dragon eggs. However, in the last episode of House of the Dragon, we witnessed some manhandling of one such egg. So the question is how durable are these dragon eggs? And what could cause them to break or scramble? Remember, baby Dragonfyre’s life depends on the answers to these questions after being tossed by Daemon Targaryen. Daemon and Mysaria at Dragonstone

In the second episode of House of the Dragon, Daemon Targaryen defies his exile to Runestone and instead captures Dragonstone with his Golden cloaked men from the City Watch. From here he sends an invite to his brother, King Viserys, claiming that he is to take a second wife and wed his paramour Mysaria within the next day. Daemon also says that Mysaria is pregnant with his child. He uses this excuse to try and justify his stealing Dragonofyre’s egg from the Red Keep. Enraged, King Viserys sends Otto Hightower, his Hand along with the Kingsguard to retrieve the egg and confront Daemon. Naturally, as it turns out, Daemon was lying all along about the pregnancy.

This is when Princess Rhaenyra steps in to prevent bloodshed. She uses Daemon’s soft spot and special relationship with her to get back the egg. When Daemon finally backs down and returns the egg, instead of simply handing it over to Rhaenyra he tosses the dragon egg hoping she catches it. The Rogue Prince has truly gone rogue.

Was the dragon egg damaged? 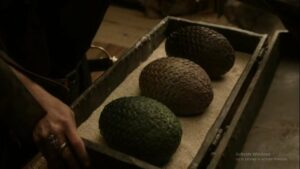 Dragon eggs in Game of Thrones

No matter what, Daemon Targaryen definitely should not have tossed the dragon egg to Princess Rhaenyra. After all, eggs should be treated gently with care and are definitely not meant for playing catch with your niece. As it turns out, the frailty of dragon eggs depends on whether dragons are descendants of lizards or birds.

According to herpetologist Vicky Zhuang, a reptile egg would be extremely vulnerable to any form of tossing and turning. The eggs are soft-shelled and would pretty much get scattered if thrown. There’s also the fear of dropping the dragon egg and breaking the shell externally which would also effectively ruin it. However, if dragons are more like birds then Daemon is somewhat off the hook and can be excused for his actions. Bird eggs have hard shells which would not crack all too easily. This is most likely the case as visually the dragon eggs look quite durable in both House of the Dragon and Game of Thrones. Bird eggs have a layer called Chalazae that basically holds the embryo in place and keeps it protected from any kind of jerking. It acts as a shock absorber. Zhuang characterizes it as a seatbelt. This would keep the egg safe despite Daemon’s reckless shenanigans.

Are dragons reptiles or birds? 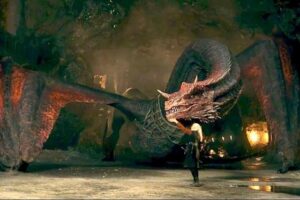 Caraxes from House of the Dragon

The only thing deciding baby Dragonfyre’s future is whether his ancestors were reptiles or birds. Turns out, it is both. Dragons have some features similar to reptiles such as the very obvious one which is scales. Their limbs and teeth too resemble that of a reptile much like a crocodile. Visually throughout both shows, they look much more like reptiles.

However, their movement including the way they fly and perch along with some other habits are much more like birds. The fact that they have two limbs and the other two limbs are modified into wings also hints at the fact that they have descended from birds. The most important fact that saves the dragon eggs is that the pine cone-looking egg most resembles that of an ostrich and is much sturdier and heavier. According to Zhuang, you would need the force of a hammer to break the egg. This means that not only can dragon eggs survive a few careless drops on the ground but they can also shoulder the entire weight of the human body in case someone maybe even Prince Daemon decides to step on them. But they obviously shouldn’t.

The Kingsguard and Otto Hightower treat the dragon egg with the care it deserves. To ensure its safety on the journey back from Dragonstone to King’s Landing the egg is kept cradled within a casket with proper cover and protection to keep it in place throughout the ride back home.