Paddy Considine, the actor who walks in the shoes of King Viserys in the latest HBO spin-off House of the Dragon, has finally shed some light on the uncertainty surrounding King Viserys’ deadly and rotting disease.

House of the Dragon is a new original series by HBO exploring the events that took place centuries before the events of the Orignal Game of Thrones and will explore a major event in Targaryen History ie Dance of the Dragons. Throughout his reign, Viserys has been subjected to several challenges. He lost his pregnant wife and newborn baby in the span of a few hours in the first episode of House of the Dragon.

Since then, he’s been constantly pressured by the members of his small council to wed himself a new queen that can provide Westeros it’s the long-awaited male heir. He also banished his brother, then kicked him in the guts upon knowing of his alleged coupling with Rhaenyra, and some blabber about the Prince who was Promised.

Viserys is Suffering From Leprosy King Viserys I Trying To Heal His Wounds With Maggots

The challenges of ruling a kingdom are compounded by the fact that he is also trying to find a suitable match for his defiant daughter. Viserys’s unknown ailment, which was originally disclosed in the pilot episode and has steadily grown severe throughout the season, has added to his already considerable stress load.

The actor provided some clarity on the king’s illness during an interview with EW for the Game of Thrones podcast West of Westeros. He not only explained the illness’s significance but also its root cause. Read on to learn what Considine has to say:

“He’s actually suffering from a form of leprosy. His body is deteriorating, his bones are deteriorating. He is not actually old. He’s still a young man in there. He’s just, unfortunately, got this thing that’s taken over his body. It becomes a metaphor for being king, and the stress and strain that it puts on you, and what it does to you physically, what it does to you mentally.” 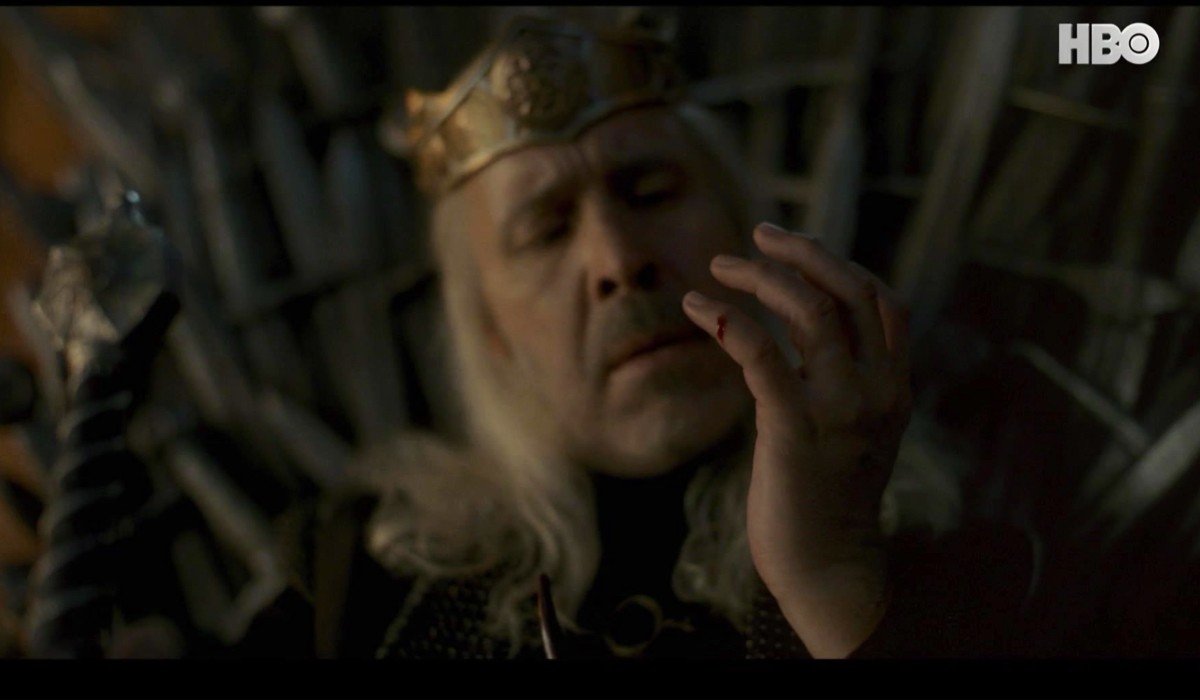 King Viserys cut His Finger on the Iron Throne

For the uninformed, Leprosy is a recurring, curable infectious illness that mostly results in nerve damage and skin sores. Those affected may experience a loss of feeling, numbness, and weakness in their hands and feet, as well as areas of light-colored or red skin. And maybe, just maybe this newfound disease would be the cause of Viserys’ eventual demise.

In Viserys’ day, the only way to deal with the disease was to cure the wounds it left behind, but as we can with the dark patches on his skin while he’s coupling with Alicent and his loss of fingers says it going otherwise.  The writer of Ice and Fire books, George R.R. Martin, has hinted that Viserys is a good man who is just unprepared for the demands of reigning, and Considine’s words back up these claims.