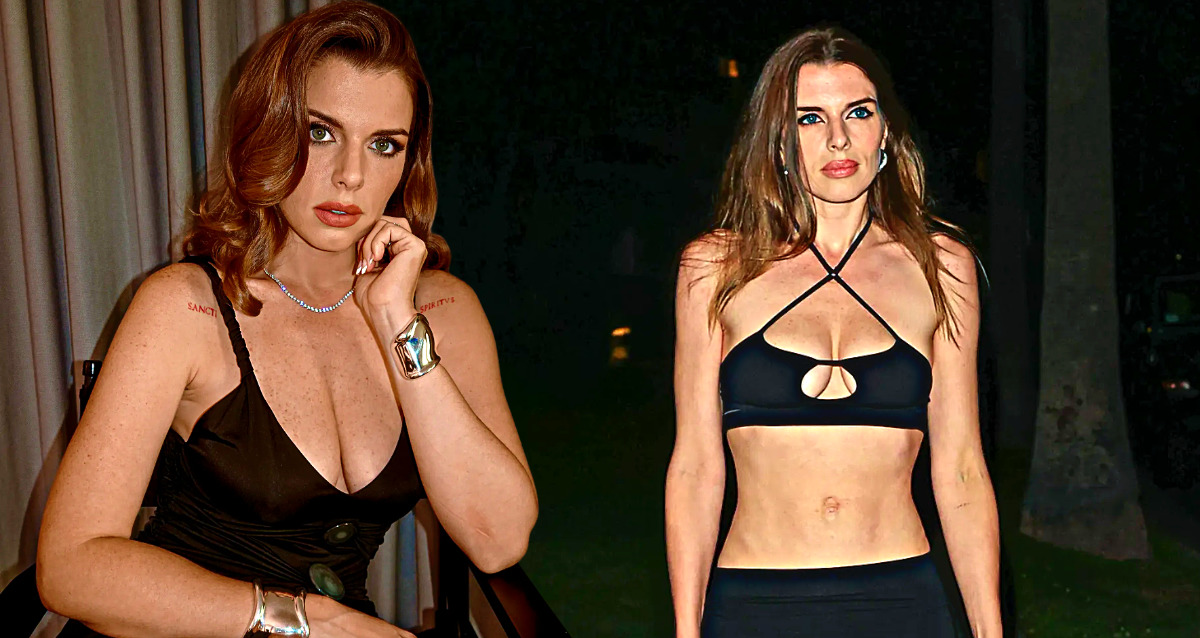 Julia Fox posed up a storm as she was captured taking a walk down the street in New York City on Sunday.

The 32 year-old ex-girlfriend of rapper Kanye West donned barely-there black bikini top to contain her voluminous assets for her outing in the Big Apple.

The Uncut Gems star’s toned abs were the highlight of the look in the swirl-patterned bikini top. She paired it with extremely low-rise black leather leggings. 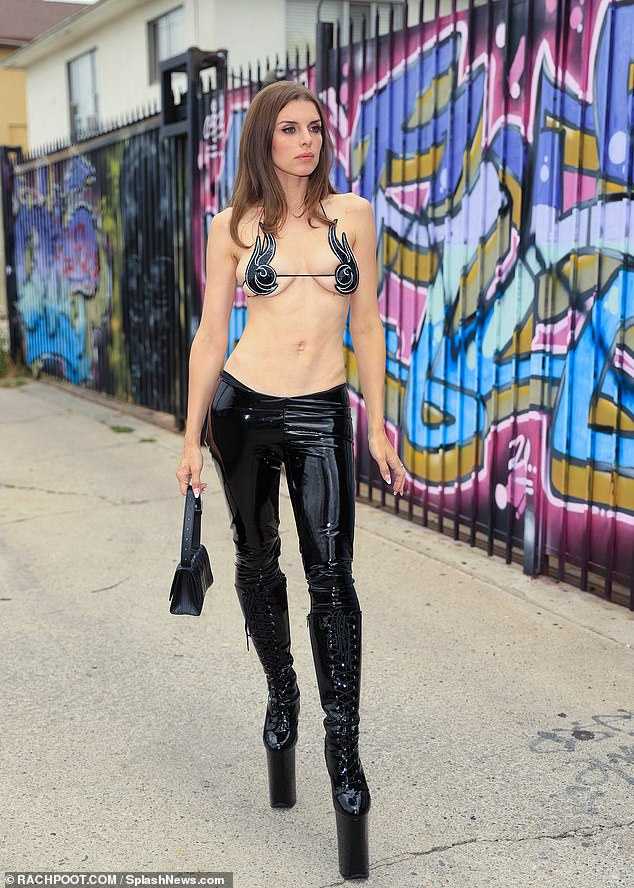 The No Sudden Move actress finished off her classy outfit with sky-high black leather platform boots that were laced up to her knees.

The brunette beauty let her long locks down over her shoulders. She upped the glam with a gorgeous palette of makeup that included a gray smokey eye, winged eyeliner, long lashes, a rosy blush and a light pink lipstick. 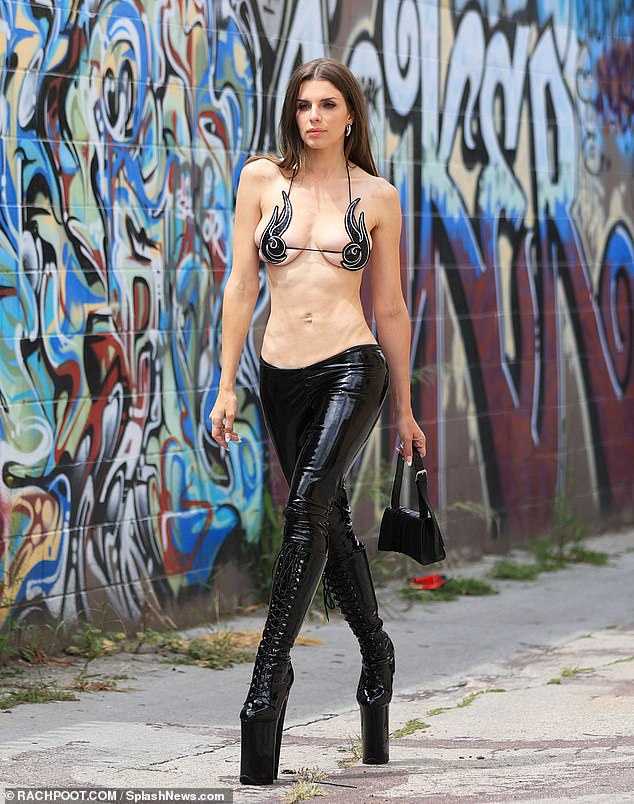 Julia Fox turned the streets of Manhattan into her own personal runway with her ravishing walk. She passed by graffiti-covered buildings and struck a pose with her hand on her hip in front of a wall covered with blue flowers.

Earlier on Sunday, the mother of one took to her Instagram Story and posted three beautiful photos of her one-year-old son Valentino.

The toddler was seen wearing a light blue Rule the Day t-shirt and a diaper. In the cute photo, he was chewing on a pacifier. 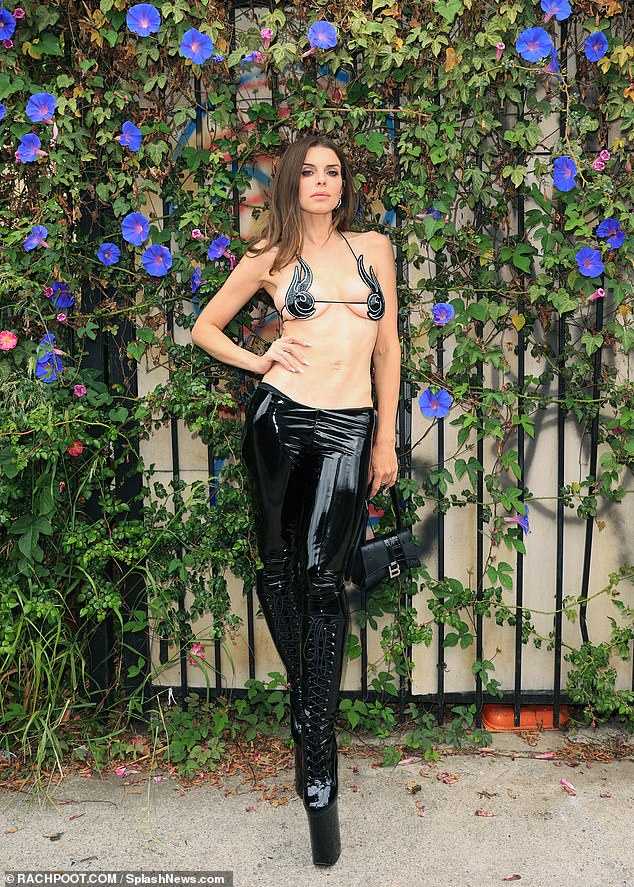 ‘The boot bandit strikes again!’ the Diesel model wrote on one of the photos.

In the last picture, Valentino was wearing his own red cowboy boots along with a red cowboy hat as Julia read him a book. 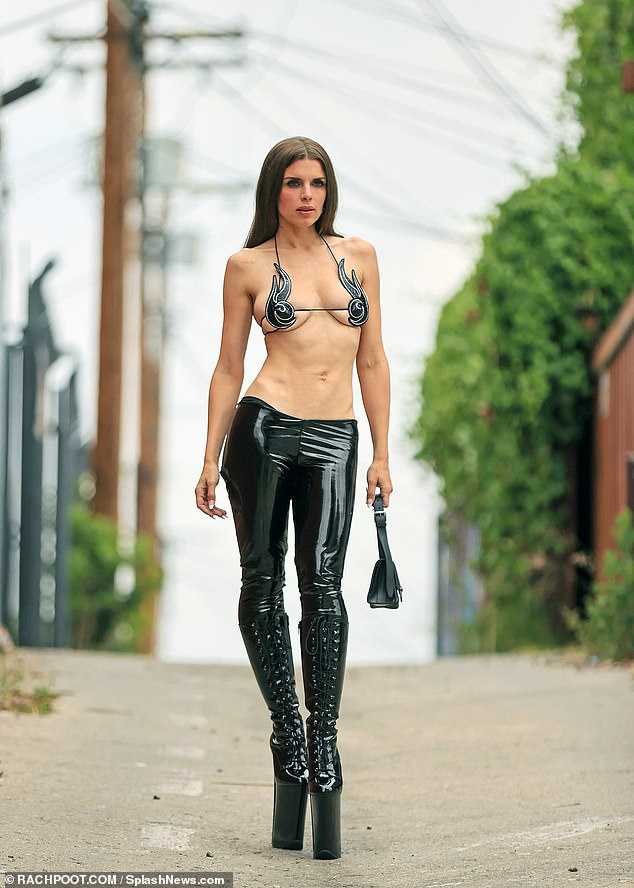 Julia turned the streets of Manhattan into her own personal runway

Julia Fox shares Valentino with her estranged husband Peter Artemiev. The couple sealed the deal back in 2018, but they went different ways in 2020.

Lately, Julia Fox has been making headlines because of certain rumors that claim her to be in consideration to join the reboot of the hit Bravo show Real Housewives Of New York City.

The team behind RHONY is ‘deep into casting,’ but insiders tell TMZ she hasn’t been approached just yet. 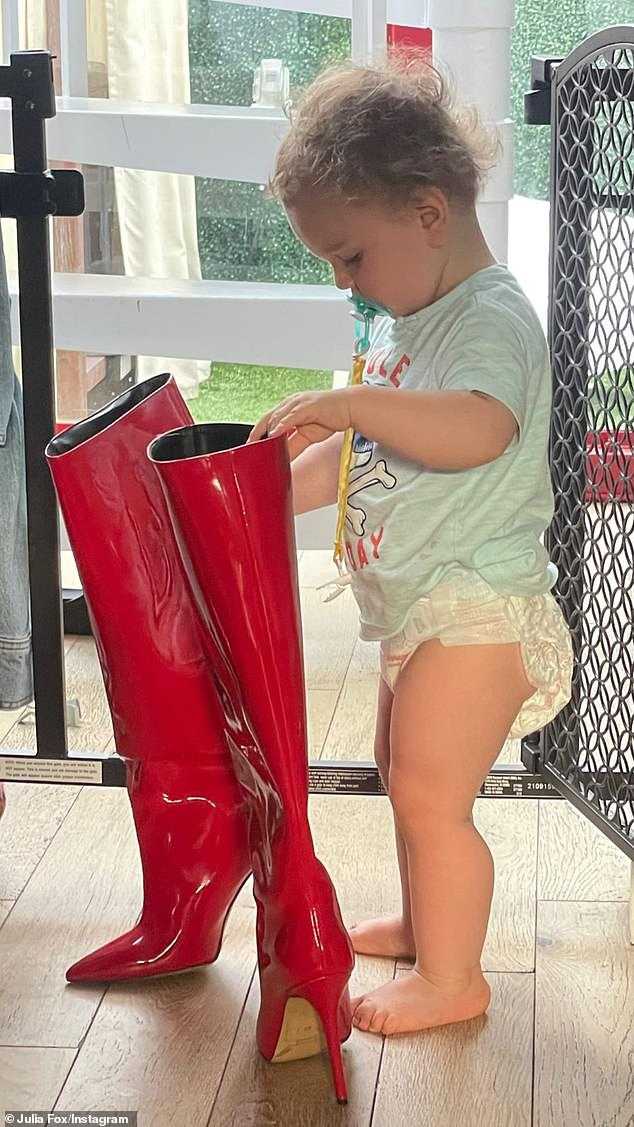 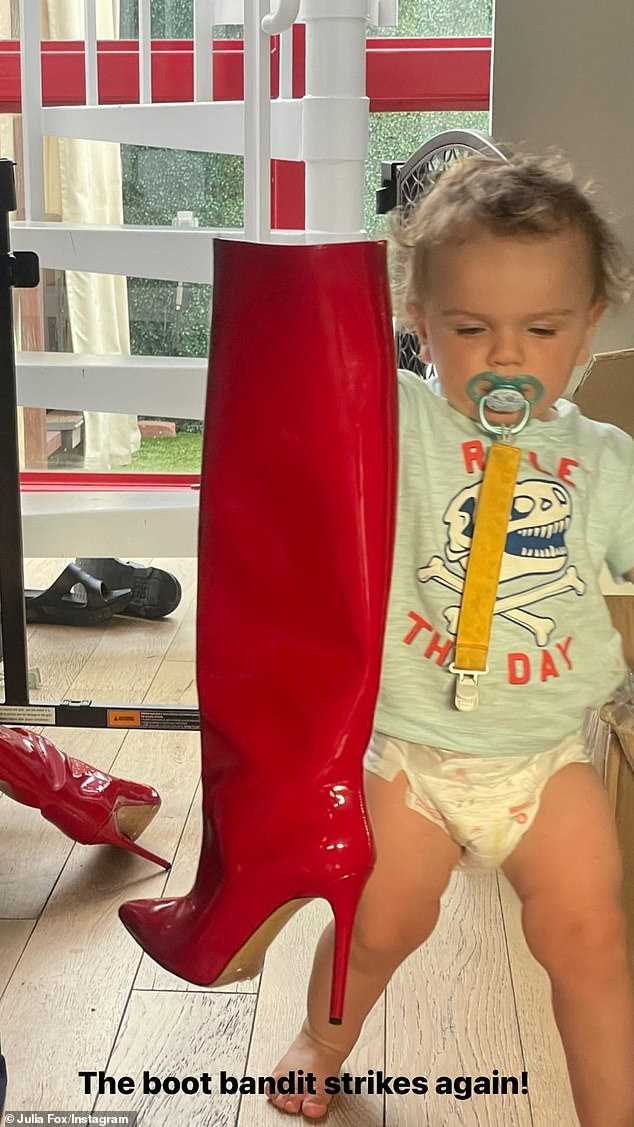 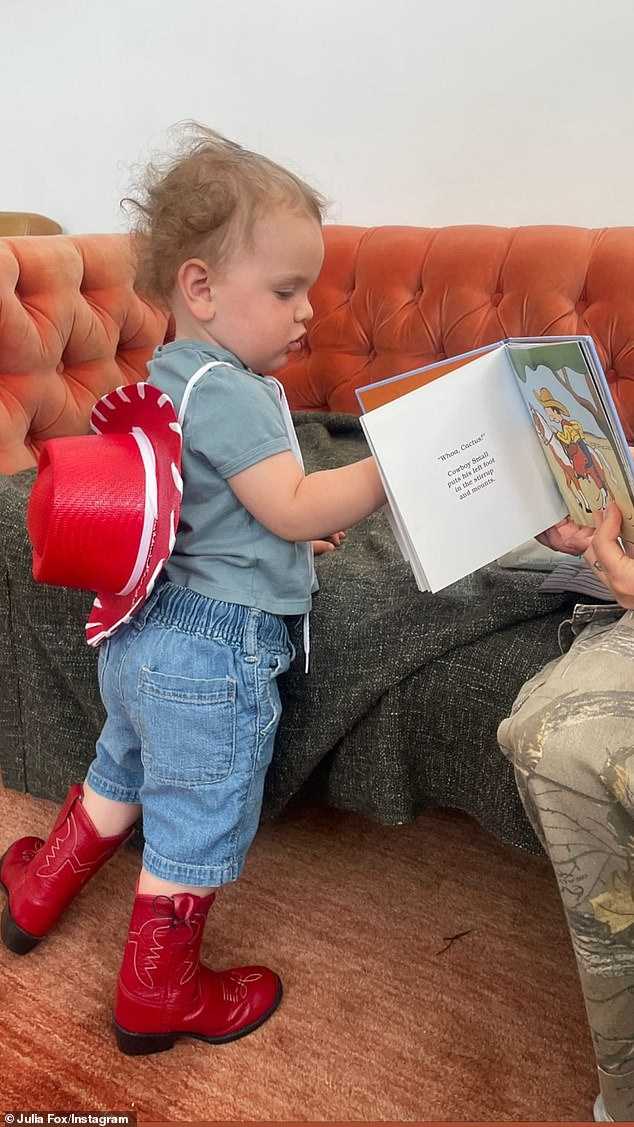 Valentino wearing his own red cowboy boots and cowboy hat

In March, Bravo’s Andy Cohen let out an update. It suggested that the network would recast and reboot the entire show after 13 seasons.

He said that the team was planning to turn the show into a spin-off by including some of the original cast members. The show’s tentatively titled is RHONY: Throwback.

As for Julia Fox, she grew up in New York City. And she’s close to one of the show’s current stars, Leah McSweeney.

Aside from the RHONY rumors, Fox is also looking forward to the positivity that comes with her first book being released soon.

On Sunday, Fox disclosed some things about her eagerly-awaited first novel. She is describing the book ‘so far’ as a ‘masterpiece.’

‘I don’t wanna give too much of it away because I am very superstitious,’ the model told Variety at the 2022 Vanity Fair Oscars party.

Asked if it’s a memoir, she replied:

‘No, it was going to be a memoir at first but now it’s just like my first book.’ 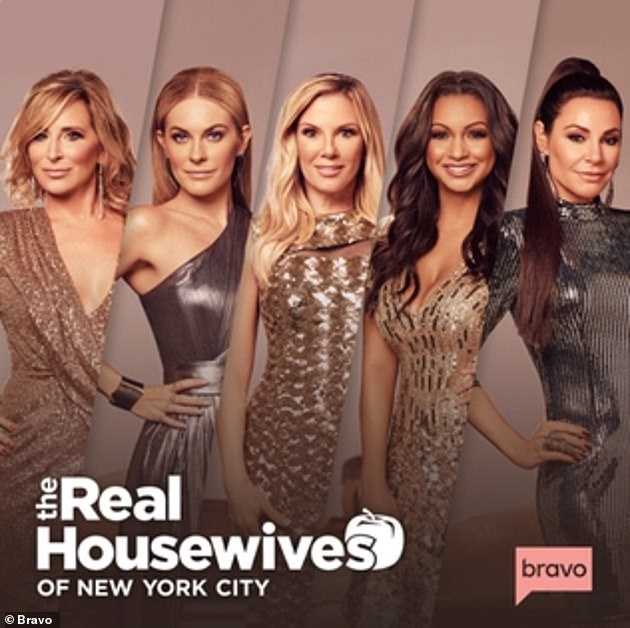 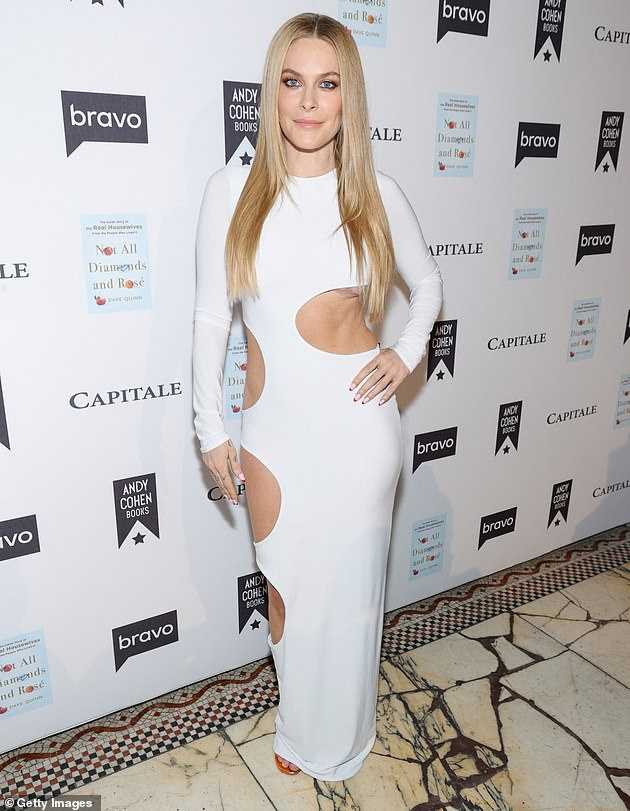 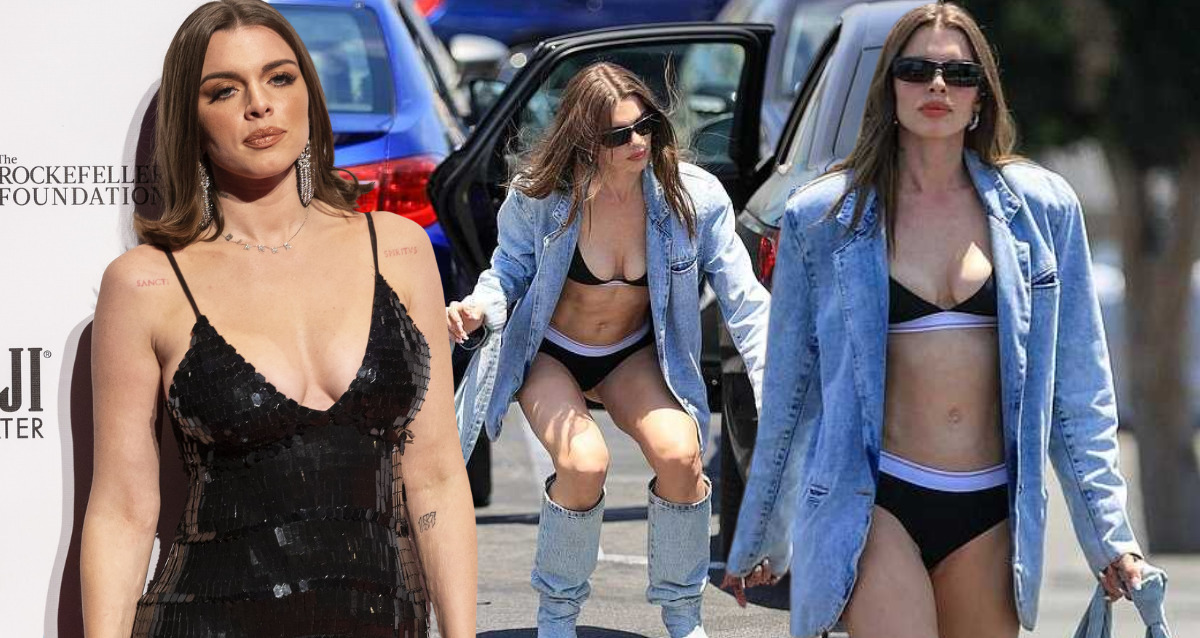