Sony has been a creative pusher for the Spiderman series for over 20 years. With creative choices comes creative responsibilities. Marvel and Sony relationship over the years has been quite commendable. Since the inception of the MCU, things have gone to be quite stricter and at order than ever before. This is all due to the direction and definition of Kevin Feige, who has been the literal “Watcher” throughout the Spiderman and MCU process. With that said, the president of Marvel Studios surely knows what’s right and what’s wrong with his projects. Kevin has been a producer, executive producer for the Raimi trilogy with Tobey Maguire.

Kevin also has seen the rise and fall of Marvel. When Blade came out in the 2000’s, no one could tell how massive of a hit it could have been. Marvel with Kevin knew what favored this success. It was sheer discipline and dedication to following a set of rules for the character. That’s when Marvel went from being an almost bankrupt company to gaining back most of their legacy characters back. The MCU you see today, is due to the gain that Marvel got through their first successful venture with Blade. Kevin saw what could be a chance to ensure Marvel gets back on its feet that will make comics forever.

When Raimi’s trilogy was successful, Kevin saw potential in Spiderman. Sony though, saw the financial prospects and started milking out what became the Andrew Garfield Duology, the Amazing Spiderman series. It really couldn’t capture the interest of the audience and fell flat. This came to haunt Feige about what Sony were doing with the character. Then came 2015, and one meeting changed everything. The contribution to being agreeable was the introduction of Tom Holland’s Spiderman in Captain America: Civil War.

Now, since 2015, it wasn’t building up to ensuring that the Pascal-run Sony Entertainment division would ever listen to Feige. They were so confident with the money they made off the character. They wanted to keep pushing Spiderman and its universe of characters as movies. Avi Roth and Amy Pascal’s one meeting with Sony changed everything. Kevin Feige remembered how that meeting went by. He wanted to lay ground rules that would shape how their movies on Spiderman and the MCU would connect. Amy Pascal didn’t like this and threw a sandwich at Feige and broke down.

After a lot of negotiations, Sony finally agreed to establish what said; are the ground rules to establishing the future of Peter Parker in the MCU. Sony, being the holder of Spiderman’s rights, had complete creative control over it; while Marvel was involved in production. This is why you don’t see any Spiderman-related discussions at Marvel’s Hall-H Panels. In 2011, there was a groundwork already set up between Marvel and Sony for the Amazing Spiderman movies. A reddit post from u/Fenrirll under the Marvel Studios subreddit; highlights a leaked contract between Sony and Marvel. It depicted the “Character Integrity Obligations” for Peter Parker and Spideman. 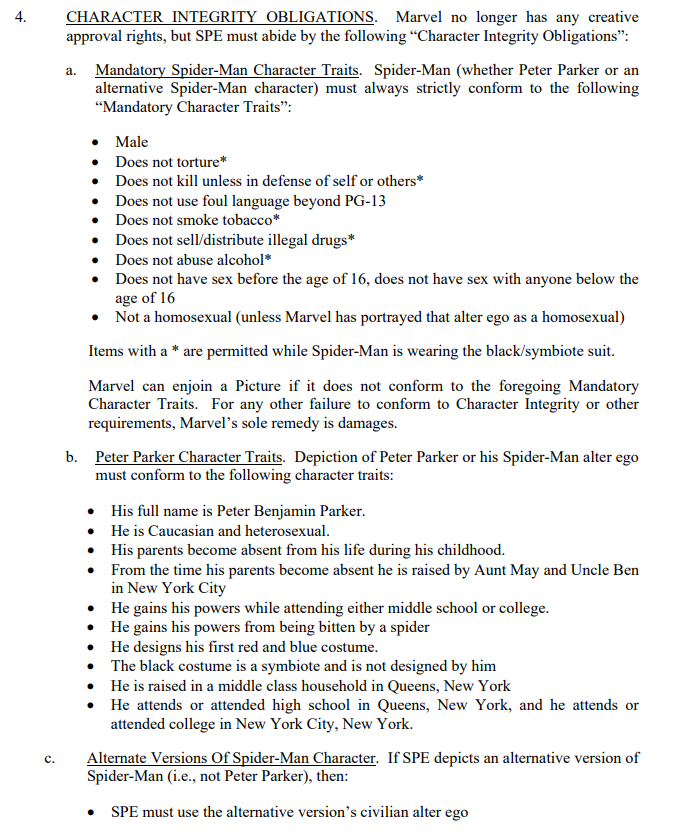 Take this with a grain of salt. Not everything as per the contract came to be in the duology (was supposed to be a trilogy). Maybe, Marc Webb, the director of the Amazing series; wanted to bring a Venom Spiderman in the third installment of the movie. That, well, in fact did not happen. The contract being lengthy; highlights the list of Do’s and Don’ts that Sony has to follow. Marvel, being the supervising authority, placed Sony under their limelight. This is to ensure they are set throughout the process.

According to the leaked contract, “Marvel no longer has any creative approval rights; but SPE (Sony Pictures Entertaiment) must abide by the Character Integrity Obligations”. Under the statement, a mandatory Spiderman Character Traits Listicle give off what we as the audience are supposed to learn. The listicle goes as follows:

The contract also further highlights the use of * to be used; when Spiderman is wearing the black suit or also known as the Symbiote suit. The contract further stated that Marvel can “enjoin”  i.e.; command or force to intervene in the production of a movie if the following rules aren’t applied to the character work in the movie. If the rules aren’t applied; Marvel is also responsible for the backlashes; and is also the sole remedy for the damages.

The contracts also further highlighted character traits for Peter Parker, who is in fact a college student. His actions in the movies are to be conforming to the given traits as per the contract:

Well, this contract teaches us one thing, and that is Marvel doesn’t play when it comes to establishing a base for their characters. Marvel has seen the potential for Peter Parker as a character and wouldn’t want this to go to waste. Tom Holland’s Peter Parker has seen its success under Marvel Studios. The No Way Home release finally gave way to seeing the potential of using 20 years of Spiderman property. It isn’t far when Into The Spiderverse may turn live-action for the MCU.