Marvel History Explains Why Thor Has Goats In Love And Thunder

It’s possible that some MCU fans didn’t expect to see Chris Hemsworth’s Thor with the goats in Love and Thunder. What does Marvel history have to say about this? After he recovered from his post-Thanos slump, the MCU’s Thor looked to set sail with the Guardians of the Galaxy following Endgame’s final battle. This would leave the new Asgard in the capable hands of Valkyrie. Gorr the God Butcher will also appear in Ragnarok’s fourth solo outing. This would be so alongside Natalie Portman’s character, Jane Foster.

The upcoming return to Asgard in the MCU has already been teased by official Love and Thunder merchandise. Jane is also decked out in Mighty Thor armor. Furthermore, there’s a LEGO minifig of Gorr to round out the collection. The “Goat Boat” LEGO set, however, maybe the funniest of the tie-in toys. Traditional Viking ships were modeled on the Goat Boat’s two mythical beasts, a wolf, and a goat. There is a logo on the front of the boat that says “Asgardian Tours”. However, in Love and Thunder, Thor may use the Goat Boat for his own purposes.

The History Of The Goats 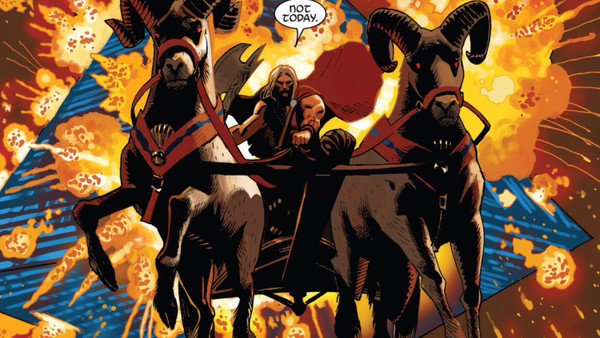 Love and Thunder’s four-legged, two-horned new cast members are rooted in Marvel comic history. For this reason, MCU fans may wonder why Thor is suddenly preceded by four-legged, two-horned companions. In 1976, Marvel comics introduced Toothgnasher and Toothgrinder. These are two goats based on the Norse mythology of Tanngrisnir and Tanngnjostr who pulled Thor’s chariot. They served the same purpose for Asgard’s God of Thunder. Since then, the goats have appeared frequently in Thor comics and are now an important part of the character’s mythology.

In the sky, Toothgrinder and Toothgnasher aren’t your average goats. They can fly and run at breakneck speeds. In addition, when the need arises, they can join their Asgardian masters in battle. In addition to being enormous, both goats are enchanted with magic, and they shoot lightning bolts from their hooves as they charge between realms. From across the entire Nine Realms, you won’t find two more deserving steeds for the God of Thunder. Thor is as emotionally attached to Toothgnasher and Toothgrinder as any pet owner, but without the high costs of veterinary care. Loki resurrects the Toothgnasher as a present for his brother, Thor, in the latest issue of Thor #16.

The reasons for Kevin Feige’s reluctance to bring Toothgnasher and Toothgrinder to life are obvious. Chris Hemsworth’s portrayal of Thor in the MCU would have been hindered if he had been towed by two goats in the grounded superhero reality of the MCU. The God of Thunder has relaxed considerably since Taika Waititi took over as director. Being friends with two magical goats now feels exactly like that’s something MCU Thor would do.

Whether or not Toothgnasher and Toothgrinder in Thor: Ragnarok are real Asgardian animals that were displaced from Earth during Thanos’ attack, or two regular Earth goats that the people of New Asgard have attempted to enchant is the more important question to answer. In Love and Thunder, they’ll be pulling an “Asgardian Tours” boat, so perhaps the latter is to be expected. There is no doubt that goats are a fun addition to Thor’s cinematic legends and a nice nod to his Marvel comic book history that the MCU has previously neglected.

To begin with, Thor and Toothgnasher and Toothgrinder won’t have the same strong connection in the MCU – at least not right away. Gorr the God Butcher, on the other hand, may decide to put the creatures through their paces and see if they’re up to the challenge. Having lost Mjolnir and the Bifrost Bridge in Love and Thunder, Thor does require a new way of getting around.