Come Thursday, Nicole Scherzinger took to Instagram to share an eye-popping view of her incredible figure during the golden hour.

The 43 year-old Pussycat Doll showcased her glorious curves in a golden Solo Mío Swim two-piece during the photoshoot with photographer Solmaz Saberi.

As for accessories, Nicole sported a gold thigh chain attached to her thong. She also wore matching hoop earrings as she put up an all revealing racy display for the shoot.

Nicole Scherzinger made the most of golden hour

As Nicole Scherzinger showed off her enviable bikini body, she allowed her long dark wet tresses to fall poker straight down her back.

The Masked Singer Judge was absolutely ravishing as she chose to rock a dewy glam makeup look with a nude lip.

While taking in the beautiful summer sun, she wrote in the caption of the sizzling snaps: ‘Golden hour’

She wore a gold thigh chain and matching hoop earrings

This latest update from Nicole comes after she partied at this year’s Coachella Valley Music and Arts Festival in Indio, CA, with her boyfriend Nicole’s boyfriend Thom Evans.

Nicole Scherzinger posed up a storm in the desert in an orange underwire bikini top with matching chiffon maxi-skirt and white sneakers.

She was accompanied by a whole bunch of people on her toes for the three-day festival. This included stylist Jessica Paster, hairstylist Davontae’ Washington, and make-up artist Adam Burrell.

Nicole Was An Early Bird After A Night Of Partying

However, come Easter Sunday, Nicole showed up at church even after spending the weekend partying at the star-studded festival.

The Grammy-nominated Pussycat Doll has a whopping army of 23.2 million followers on social media. She took to her Instagram Stories and captioned it with: ‘Happy Easter everyone! He is risen!’

Nicole Scherzinger started going out with the 37 year-old retired rugby player in November 2019. The two first met on the set of The X Factor: Celebrity where she was a judge and he was a contestant. 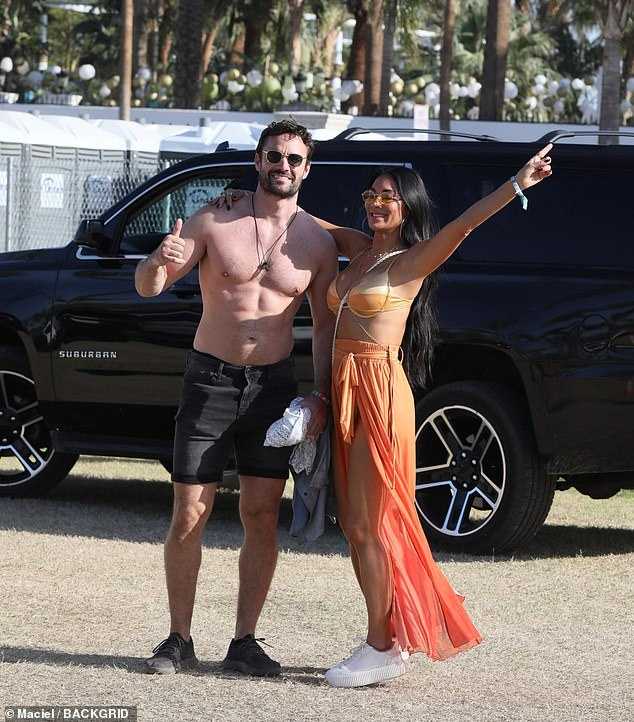 In other news, Nicole has revealed that she is currently ‘working on an album’ as she took to the stage at her show in Los Angeles.

The singer also recently canceled The Pussycat Dolls reunion shows. And she is yet to drop a solo album since her 2014 dance-pop record, Big Fat Lie failed to chart.

According to The Sun, the star addressed the audience at the gig and said:

‘I’ve been doing some writing lately, working on this album.’

She even revealed some of the lyrics to her new song for the first time, as she sang:

‘I’ve been underestimated, undermined, underrated. If you only knew what it takes every day just to defeat it.

He is her ‘Real-life Superman!’