People Around The World Come Together To Bring Peace For Ukraine 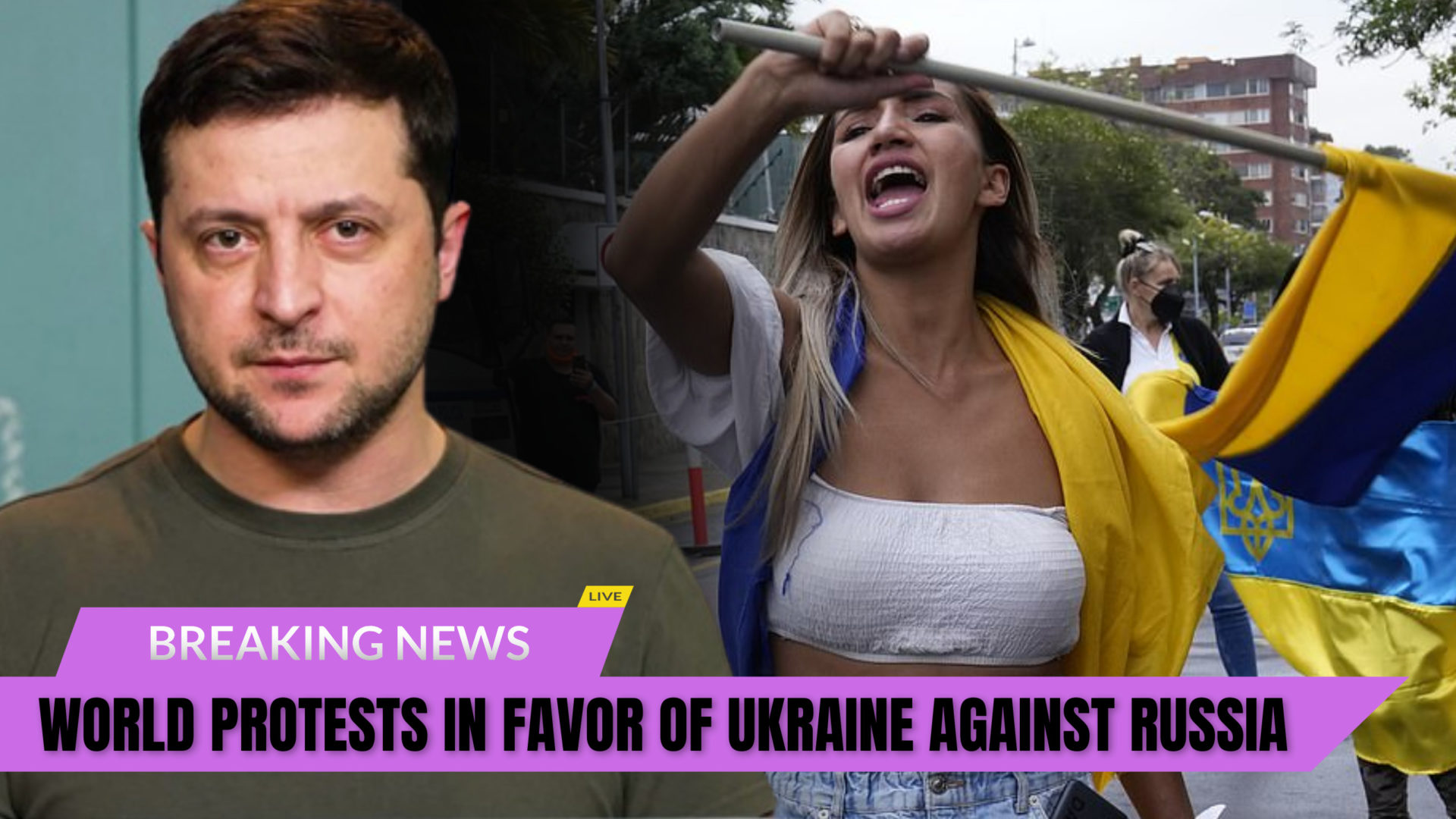 Thousands of people took Volodymyr Zelensky’s call to protest against Putin’s brutal invasion of Ukraine on Thursday. Some people in countries that are more pro-Russian came out in support of Moscow. On Wednesday night, Ukraine’s president made a passionate video address. He told people to come with Ukrainian symbols, to support Ukraine, to support freedom, and to support life. Peace is important. Ukraine is very important. From March 24, people who want to stop the war will meet together in the downtown areas of your cities. 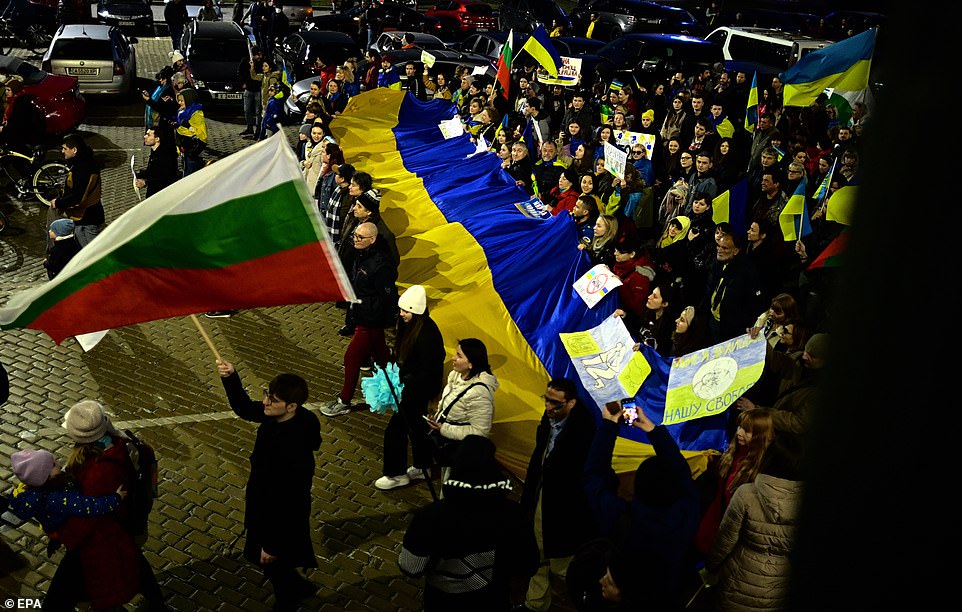 People demonstrate during a march in support of the sovereign Ukraine in Sofia, Bulgaria, 24 March 2022.

People all over the world came out in force on Thursday. There were blue and yellow flags everywhere, from London to Sofia to the Hague. People in cities like London, Sofia, and the Hague were calling for an end to the war, which has killed thousands and destroyed cities over the last four weeks. It was a place where people protested in the United Kingdom. When the last Ukrainian soldier dies, Vladimir Putin will come for you, ladies and gentlemen. 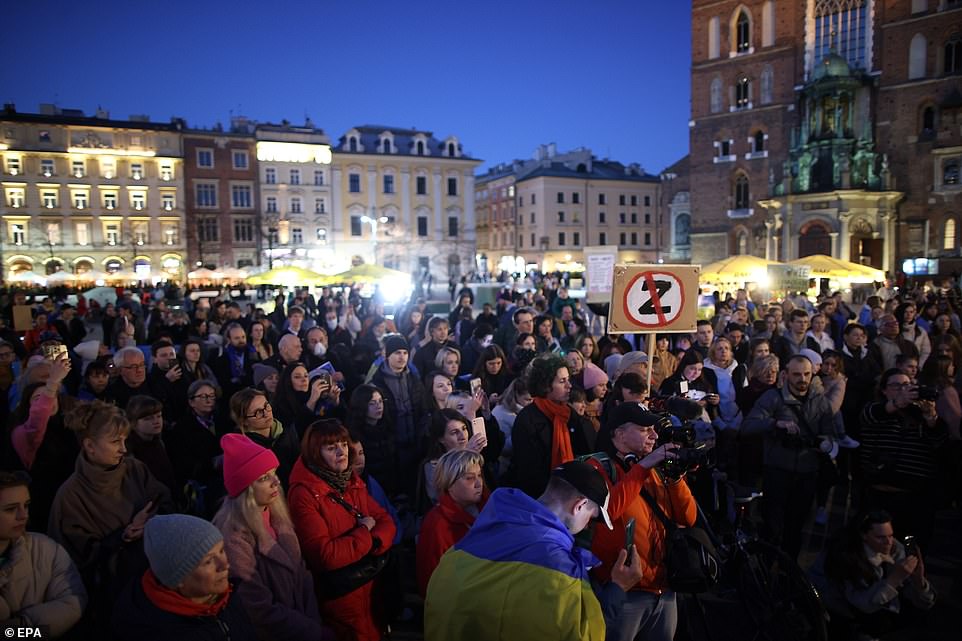 People take part in an anti-war demonstration ‘No war in my name’ at the Main Square in Krakow.

There were people outside the Russian Embassy in Dublin to mark one month since Vladimir Putin sent his troops across the border into his neighbor’s country. The embassy has become the center of Irish anger about the war. There were a lot of banners with the words “Solidarity with Ukraine” on them all over the crowd. Scotland’s national football team played Poland at Hampden Park in Glasgow in a quick match after Scotland’s 2022 World Cup play-off semi-final against Ukraine was put back until June. It was clear that there were many Ukrainian flags around the stadium. One fan had a banner that said “Putin the boot into Putin.” 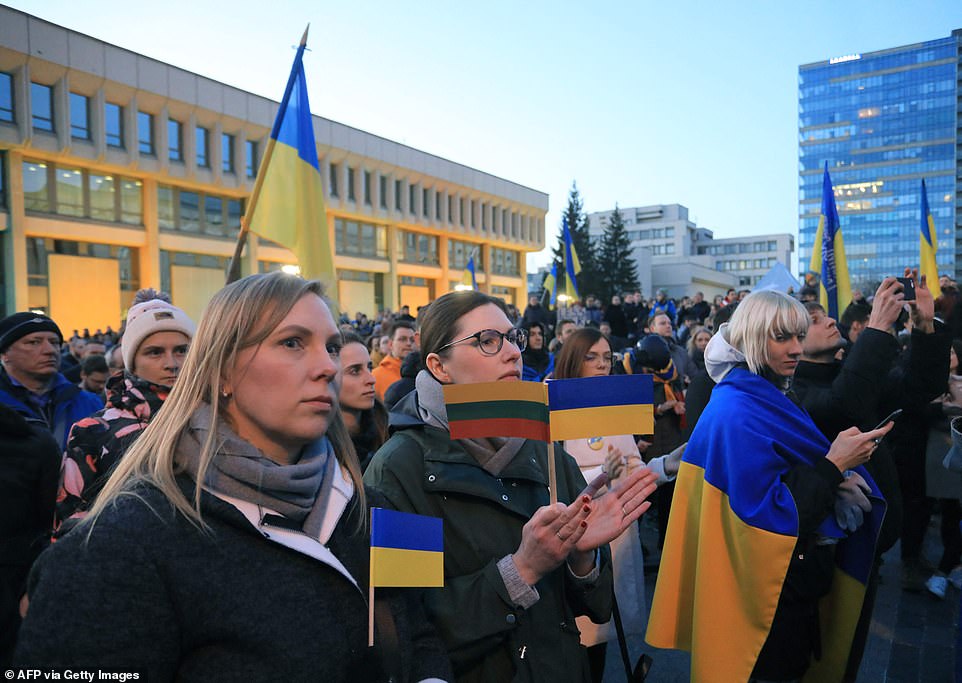 Demonstrators take part in a protest against the Russian invasion of Ukraine at Independence Square in front of the Parliament Palace in Vilnius.

People also took to the streets in cities on the mainland of Europe, like Paris and Berlin. A huge anti-war protest took place on the streets of Sofia, the capital city of Bulgaria. Some of the people who fled Ukraine to live in Bulgaria joined in. Protesters waved Ukrainian and European flags and chanted “Stop the war,” “Stop Putin,” and “Freedom for democratic Ukraine.” There were a lot of people at the event who said that it was time for Bulgaria to show its support for a free Ukraine. 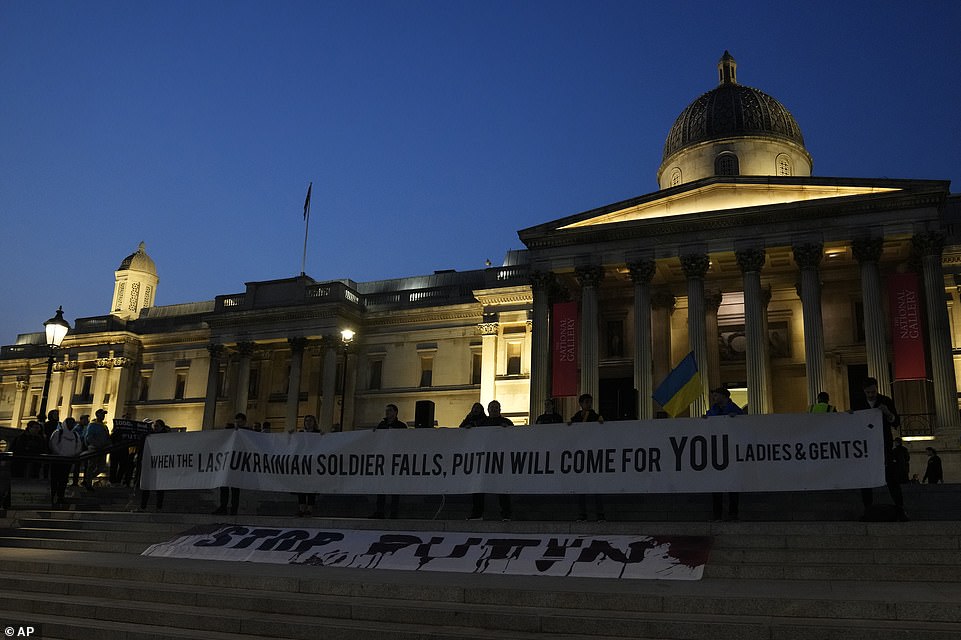 Ukrainian supporters demonstrate in Trafalgar Square as they protest against the Russian invasion of Ukraine. 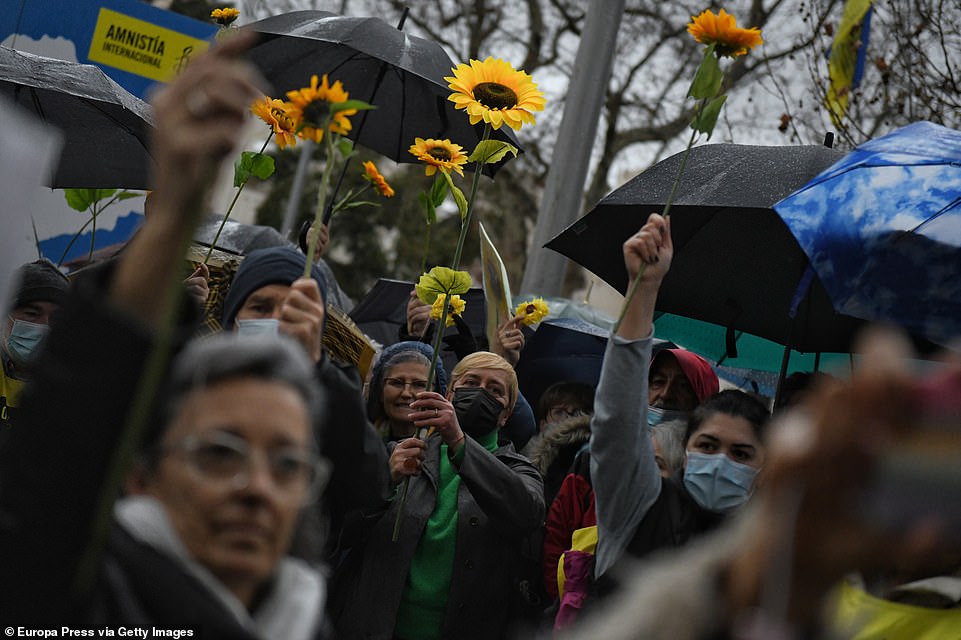 People hold sunflowers, the Ukrainian national flower, during a demonstration in support of Ukraine in Madrid. 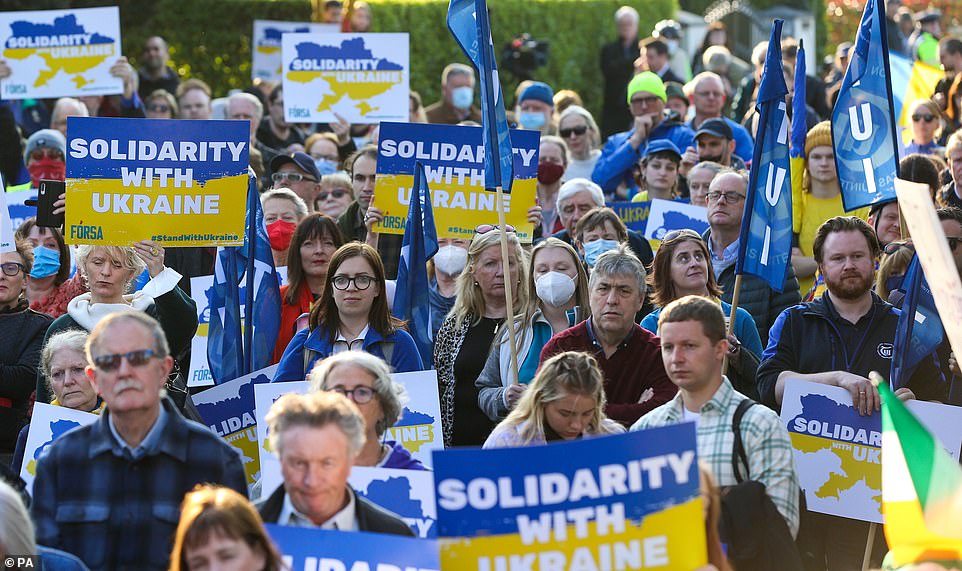 Protesters gather outside the Russian Embassy in south Dublin

Some people were holding signs that looked like road signs outside Russia’s consulate in the city, and one of them was holding one of these signs. ‘Embassy of the Russian Federation’ had two ways out of it, both of which led to the ‘International Criminal Court.’ Two thousand people also came out to support Ukraine, from Vilnius and Krakow in Lithuania to Krakow and Zagreb in Poland. 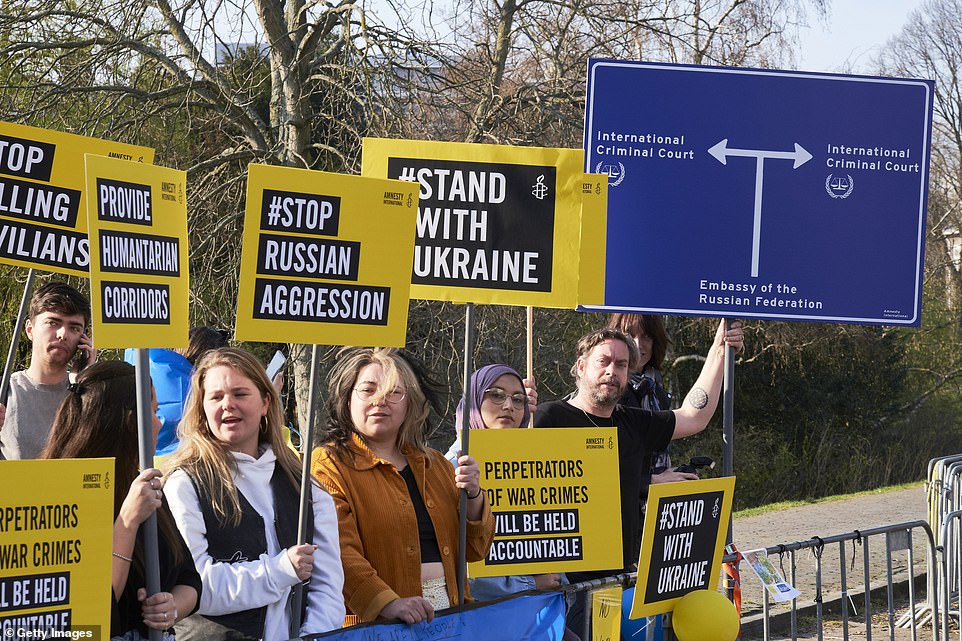 Human rights activists protest outside the embassy of the Russian Federation in Hague. 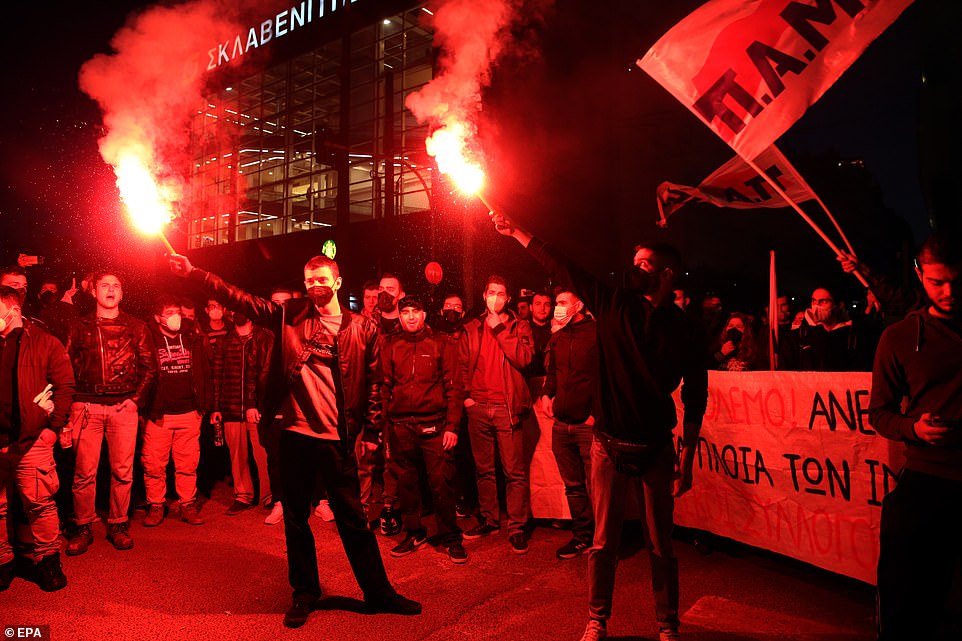 Protesters take part in a rally, called by the Piraeus Labor Union.

They did this to show their anger at the war in Piraeus, Greece. Because the French aircraft carrier Charles de Gaulle was going to be in the port town; and some of them were also angry about that. The sunflower is the national flower of Ukraine; and has become a symbol of resistance against the Russian invasion in Madrid, Spain. People held up sunflowers as a sign of their opposition.