The Skywalker Saga has concluded (for now, that is) with Rey beginning her journey as a Jedi Knight. Her final fight was with Sheev Palpatine (aka Darth Sidious).

He was one of the last Sith Lords. And so, when he died during the final Exegol battle, the Sith Order perished with him. But even though the Sith are now gone, there are other enemies that she could take on. After all, the galaxy is huge, and even though the Sith may have been its biggest threat, others of a different kind might very well arise. Thus, Rey Skywalker and her generation of Jedi Knights will have to rise to the occasion.

Now, it’s well-known that the fights between the Sith and Jedi orders account for most of the conflicts in Star Wars. However, destroying the Sith allows for writers to set up more stories and interesting villains. The High Republic multimedia project, set between the Sith Order’s so-called destruction about a millennia before the Skywalker Sag, makes unique and creative use of the Star Wars galaxy.

The writers use it to let the Jedi face off against new enemies. In the now-Legends universe, there were several antagonists other than the Sith. So even though Rey Skywalker’s story has ended in Star Wars: The Rise of Skywalker, there will inevitably be plans for a story set after the events of the Sequel Trilogy.

And when that happens, there are multiple potential antagonists apart from the Sith that Rey and her Jedi Knights can fight. After all, a revived Sith Order is getting a little old as well. So maybe there could be other dark side enemies who could step into the gap left by the Sith? Or maybe there could be villains from the High Republic era who could make a comeback?

Thanks to the post-2014 canon Star Wars universe’s habit of reimagining stuff from the Legends timeline, Rey might find herself face to face with newly revamped versions of the Legends antagonists. So what villains could she fight? That’s what we are here to discuss now:

Throughout both Legends and canon, the Sith and Jedi are not the only organizations that use the Force in the galaxy. In Star Wars: The Clone Wars, there was a reimagined version of the dark side-using Nightsisters and Dathomir. Also, in Rogue One: A Star Wars Story, there were the kind Guardians of the Whills.

Even the sequel trilogy Knights of Ren worked with the Sith. So there is a precedence of using other dark-side using cults that worshipped the Siths. As such, they could take the place of the Knights of Ren and the Siths to challenge Rey and her allies. After all, even though the Siths have been destroyed, but the dark side indeed lives on.

The Sith were eliminated during the Exegol battle. However, even though the First Order was brought to its knees, their fascist ideology could have survived. The Galactic Empire surrendered officially one year after the events on Endor. Now, the New Republic oversaw the demilitarization of their forces. But it’s possible that some Imperial factions could have continued to survive and even thrive independently.

They could have gone after the innocent, as was shown in The Mandalorian. So there will always be brutal but weak-willed individuals and organizations who will succumb to the call of fascism. As such, ex-First Order members could quite easily be set up as reoccurring threats in the galaxy after the fall of the Sith.

It is a sentient plant species that was a major threat to the Republic and the Jedi during the High Republic time. The Drengir had durable bodies and an intrinsic connection to the dark side of the Force. They were so durable that even a lightsaber couldn’t slice through them. As such, the Drengir were incredibly challenging enemies for the Jedi. This plant species wanted to consume all life forms.

Since eliminating them was a challenge, they were trapped in an ancient space station called the Starlight Beacon. This meant that the dark side wielding deadly plants could one day come back and be a huge threat if their stasis field gets destroyed. 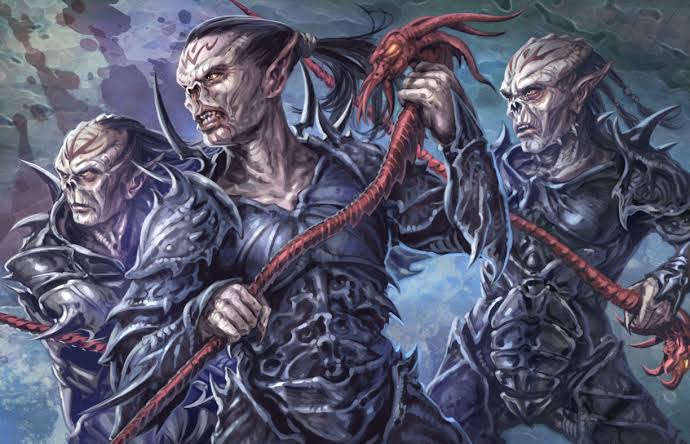 Yuuzhan Vong was a popular villain from the Legends timeline. They are an extragalactic species that don’t use the technology of any kind. Their Armor, weapons, and even spaceships are organic. Also, this species can resist Force users. The Yuuzhan Vong went after the galaxy once the Empire surrendered in the Legends era.

Now, in the canon timeline, a new version of them could be easily used. As such, they can replace the Sith. Since Rey is rebuilding the Jedi Order, so an enemy with lightsaber-resistant Armor and weapons (along with absence in the Force, too) can throw her and her knights a curveball.

The constant fights between the Jedi and the Sith will always continue in some way or the other. But the criminal underworld of the galaxy far, far away will continue to survive and thrive. We know that the Hutt clans often switched between being an ally and a foe to the Jedi Order. Their decision and role depended on profits. So using the Hutts as opponents would provide a unique opportunity to have Jabba’s son Rotta the Hutt become a villain.

Apart from this, criminal organizations like Crimson Dawn can take over worlds if they are left unmonitored. Also, along with the above, fans will remember the Death Watch. They are a highly skilled Mandalorian terrorist group with lightsaber-resistant Armor. Thus, they could be a potentially huge challenge to Rey and her generation of Jedis.

Now, Grand Admiral Thrawn isn’t a Sith or even a Force-sensitive. But he is one of the most dangerous beings in the entire galaxy because of his cunning intelligence and malice. Timothy Zahn created him for the Legend timeline, but a rebooted version was used in Star Wars Rebels. And he could return to terrorize the galaxy again in the upcoming Disney+ Ahsoka show.

Now, the one thing about Thrawn that’s the same in all timelines is that he believes in the Empire’s ideology. And he enforces this with tactical efficiency. So if Thrawn survives his clash with Ahsoka, then he could become one of Rey’s foes.

In the Legend era, Abeloth was regarded as one of the most powerful beings in the galaxy. Her abilities went beyond that of the Sith and the Jedi. The Abeloth was essentially an eldritch abomination in the franchise. She could be brought into the canon timeline easily, to “The Mother” of the Force-connected realm of Mortis. This would make Abeloth pretty much a goddess.

She was such a huge threat that the Sith and the Jedi had to work together to defeat her. Suffice to say that there are very few Star Wars villains who have her power and scale. As such, she would make a fitting enemy for Rey after the Sequel Trilogy.

You might also like: The CEO Of Star Wars Teases The Return Of Rise Of Skywalker Actors.