These Statistics Rank All MCU Movies Till Now 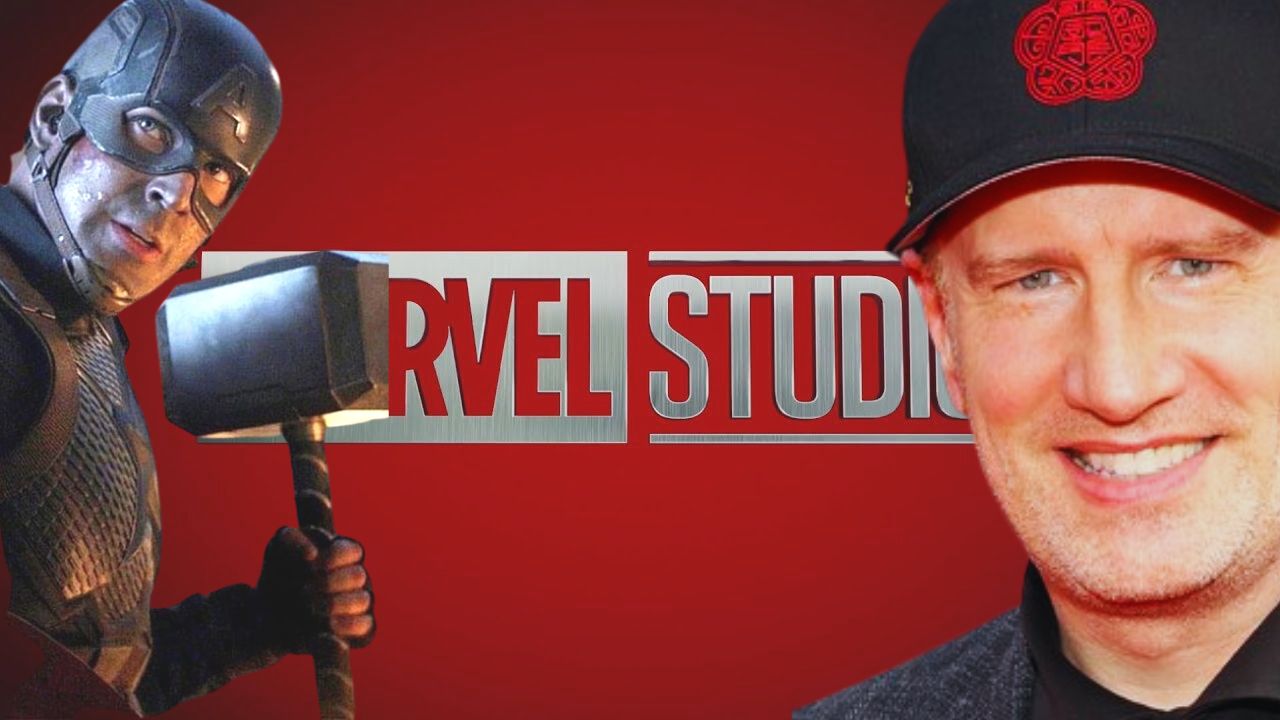 Kevin Feige, the President of Marvel Studios has created a true ‘marvel’ with the Marvel Cinematic Universe. The 29 MCU movies released in the past 14 years have broken numerous records at the Box Office. These films have also made a massive fan following.  All of these have been very successful at the Box Office, and have enjoyed enormous love from their audiences.

This article attempts to statistically analyze the MCU movies statistically, on the basis of different categories. These categories are – IMDb scores, RT scores, Cinemascores, Runtimes, and Budgets, along with their Box Office and Opening Weekend collections.

Statistics of the movies in the Marvel Cinematic Universe (MCU)

IMDb stands for ‘International Movie Database’. It is an online database of information related to films, television series, etc.  It also has information related to the cast, plot summaries, trivia, fan and critical reviews. On the basis of fans’ and critics’ ratings, it rates them out of 10, called ‘IMDb rating’. It is one of the most accessible ratings for the general audiences, hence has a huge significance. 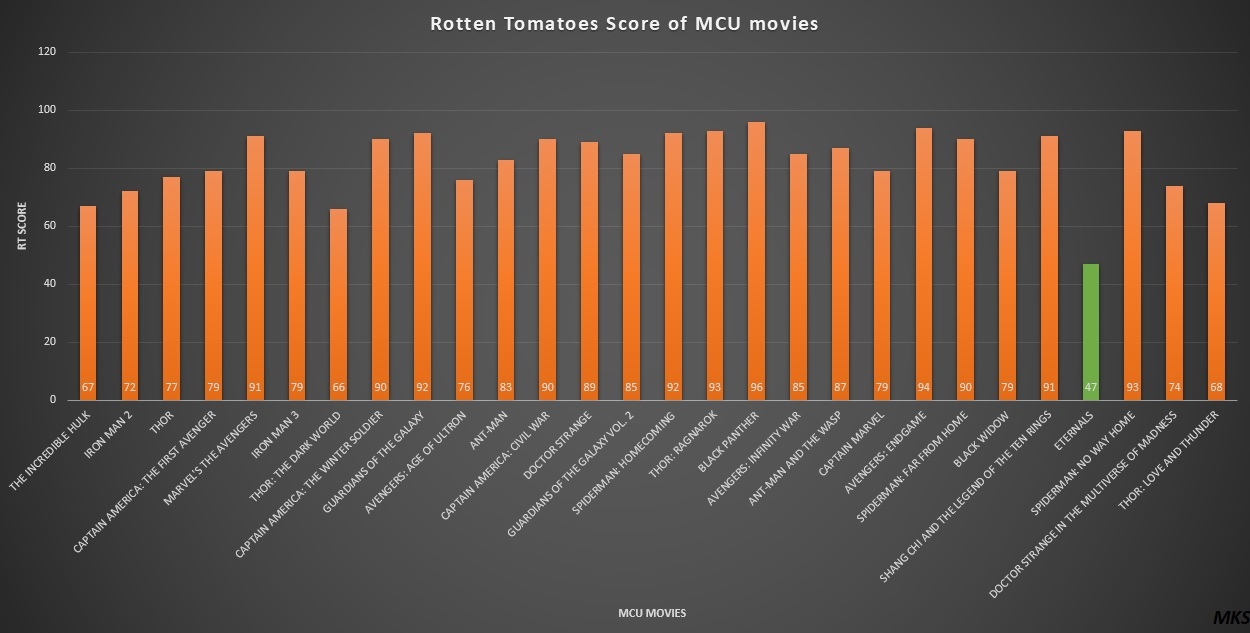 Among the MCU movies so far, Eternals remains the only one to be certified as ‘Rotten’ on the site. It currently stands at a score of 47%. Black Panther enjoys the highest score of 96% and is ‘Certified Fresh’ on Rotten Tomatoes.

Based in Las Vegas, CinemaScore is a research firm that surveys film audiences to rate their viewing experiences with letter grades. It is considered as one of the most authentic surveys. It is conducted only for the audiences that have watched the film. Every Friday, these audiences are selected in five randomly-chosen U.S. cities. Each of them is provided a card, asking for their age, gender, a grade for the film (“A”, “B”, “C”, “D” or “F”), whether they would rent or buy the film on DVD or Blu-ray, why they chose the film and whether or not they felt the film lined up with its marketing. CinemaScore typically receives about 400 cards per film. 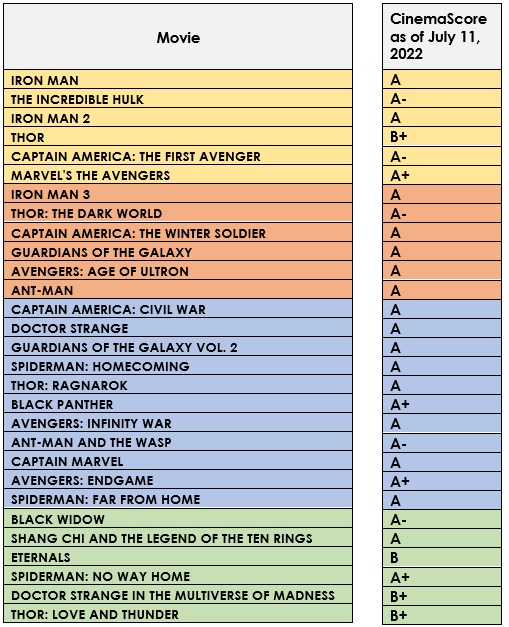 SpiderMan- No Way Home, Avengers- Endgame, and Black Panther stand highest at A+ score according to CinemaScore, while Eternals stand lowest with a CinemaScore of B.

Movie runtimes play a major role in the quality of the movie. The runtime should be neither too small nor too large. It must be just sufficient to provide a satisfactory experience to the fans and audiences. 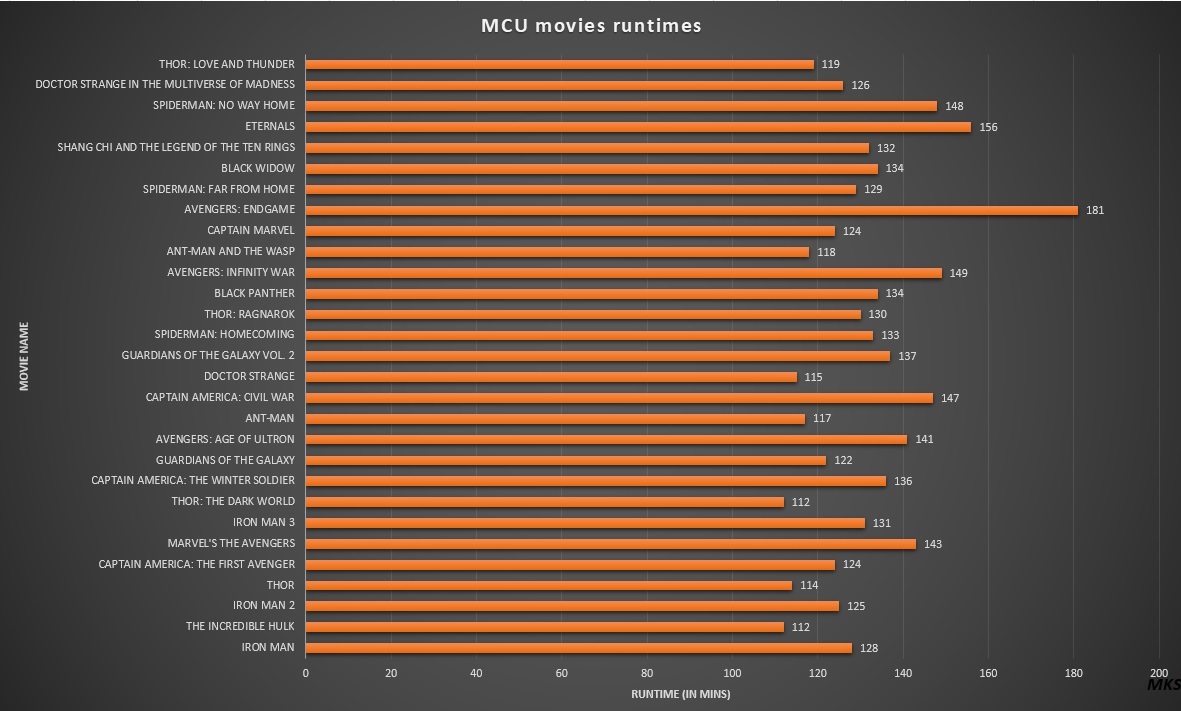 Avengers Endgame has understandably the highest runtime of around 181 minutes, given the scale of story it had to manage. Thor- The Dark World and The Incredible Hulk, remain with the shortest runtime, clocking at 112 minutes. 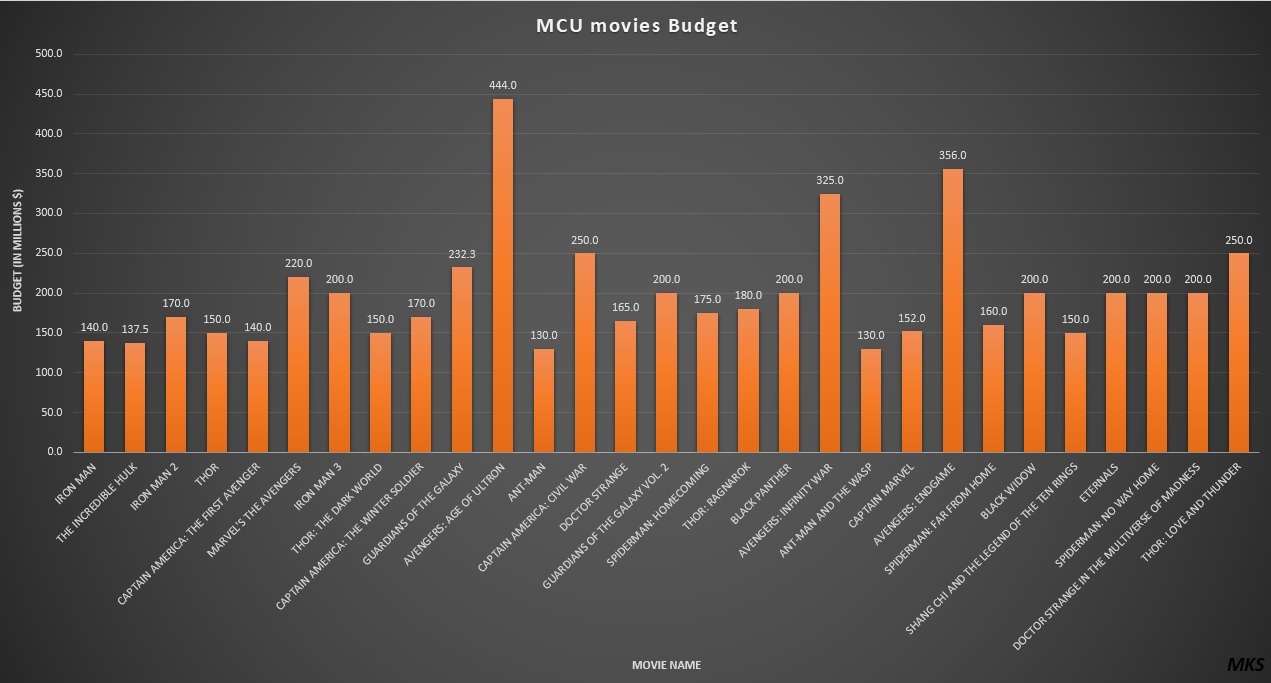 Surprisingly, Avengers: Age of Ultron remains the costliest movie of the entire MCU, with a whopping budget of around $ 444 million. However, the Ant-Man movies (Ant-Man and Ant Mana and the Wasp), had the lowest budget – around $ 130 million.

Ultimately, what decides the success of a movie is the amount of collection that it makes. The collection made on the opening weekend decides the anticipation and hype that the movie had generated in its marketing campaigns. The worldwide box office collection signifies the quality of the movie that was made. Also, it tells the response of fans worldwide to the particular movie.

With the exception of the recently released Thor: Love and Thunder, Avengers: Endgame stands tall among all MCU movies. It garnered around 357.1 million on its opening weekend and made around $ 2.79 billion during its entire run. Whereas Ant-Man had the lowest opening weekend figure ($ 57.2 million) and The Incredible Hulk had the lowest worldwide box office collection ($ 264.8 million) during its run.

With many more projects in the pipeline of MCU, the coming years will see more records being broken. However, so far it is an undeniable fact that Marvel Cinematic Universe has made a remarkable impact on the movie industry. Each of their movies involves immense hard work from the cast as well as the production team. It is Feige’s precious legacy and is loved by fans across the globe.

(All of the figures involved are courtesy of Wikipedia and http://www.the-numbers.com).