As Putin’s invasion continues to falter, Ukrainian troops have reached the Russian border after successfully pushing Putin’s forces away from Kharkiv, the country’s second-largest city.

Soldiers carrying a border marker painted in the Ukrainian flag’s colours and emblazoned with the country’s trident emblem filmed themselves erecting the post somewhere north of Kharkiv.

‘On the 15th of May, Ukraine’s territorial defence forces – 227th battalion, 127th brigade – marched to the border that divides the Russian Federation – the occupiers – and Ukraine. In video released today by regional governor Oleh Synyehubov, one of the soldiers says, “We are here.”

The exact location of the footage is unknown, but it was most likely shot near Ternova, a town about two miles from the Russian border that Ukrainian troops crossed on Saturday, according to military officials. 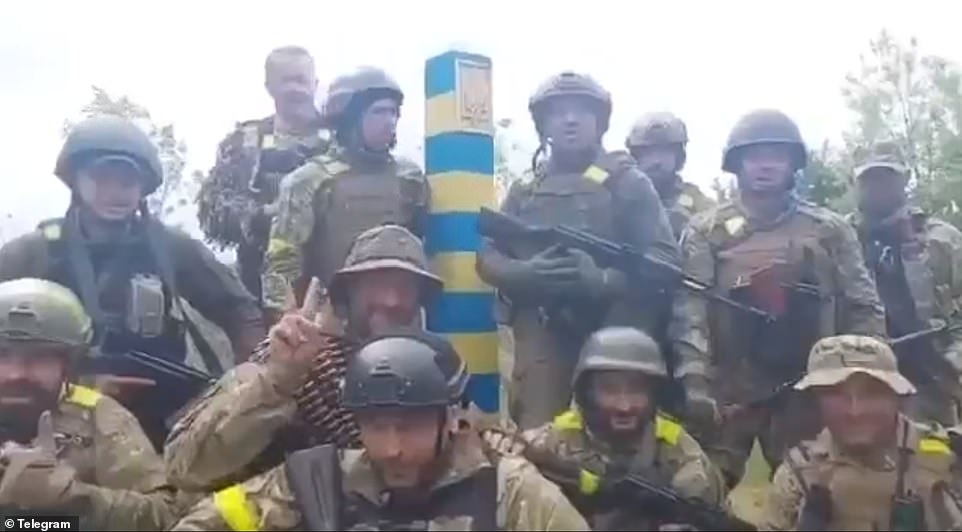 Ukraine has nearly pushed Russian troops out of Kharkiv, ending a bombardment of the city that began on the first day of the war and resulted in the deaths or injuries of thousands of civilians.

It came as NATO Secretary General Jens Stoltenburg predicted that Ukraine would ‘win’ the war after reversing offensives in Kyiv and Kharkiv and halting the main advance in Donbas. Stoltenburg said the invasion isn’t going as Moscow planned during a meeting of NATO defence ministers in Berlin on Sunday, as Finland and Sweden announced formal plans to join the alliance.

‘They were unable to capture Kyiv. They’re retreating from Kharkiv’s vicinity. In Donbas, their major offensive has stalled. Russia is failing to meet its strategic goals. Ukraine can win this war,’ he said, without specifying what he meant by victory. 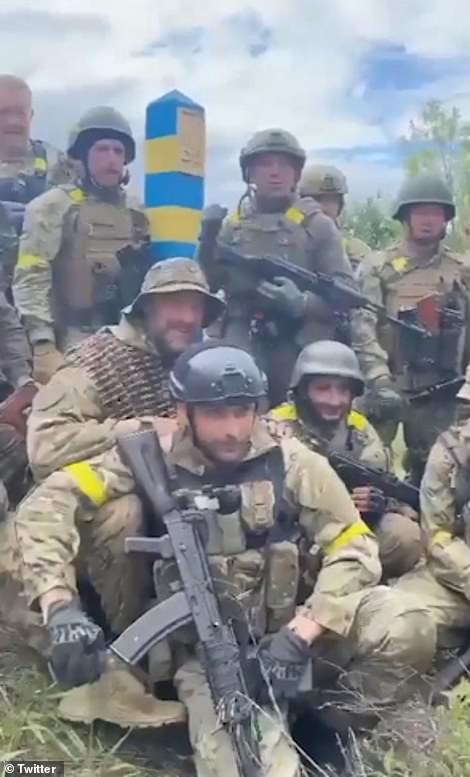 According to Ukrainian Foreign Minister Dymtro Kuleba, victory in the early days of the war meant the survival of the state and the withdrawal of Russian forces to pre-invasion territories, as well as the payment of reparations.

However, as the conflict has progressed, Kuleba claims that the goal now is to force Russia out of all Ukrainian territory, including occupied Crimea and rebel-held Donbas.

The United Kingdom has expressed support for this goal, while the United States has stated that it wants to see Russia weakened to the point where it can no longer invade another of its neighbours.

Such objectives, Moscow has warned, risk a direct confrontation between NATO and Russian troops, which could escalate into a nuclear war.

The battle for the eastern Donbas region will be crucial to the war’s outcome, with President Volodymyr Zelensky warning that his commanders are bracing for a new Russian attack in the area today.

In his nightly address, President Volodymyr Zelensky said, “We are preparing for new attempts by Russia to attack in Donbas, to somehow intensify its movement in the south of Ukraine.”

‘The occupiers refuse to admit that they are stuck in a dead end, and their so-called’special operation’ has already failed,’ he added.

After withdrawing from Kharkiv following the Ukrainian counteroffensive, presidential adviser Oleksiy Arestovich told local television that Russian troops were being transferred to Donbas.

According to interior ministry adviser Vadim Denisenko, Kyiv’s troops have made such progress in the northern region that they are almost at the Russian border.

According to the Ukrainian army, some Russian forces remain to try to stop the advance, and air sirens were heard in Kharkiv city early Monday.