Who Will Be Peter’s Next Girlfriend In Spider-Man 4?

Everyone loves Spider-Man because he is a regular everyday guy who faces hardship. That’s why he is called the Friendly Neighborhood Spider-Man. But one part of his everyday struggles is romance.

It’s quite difficult to imagine Spider-Man stories without romance. One decade after the other, new love interests have been introduced into Spider-Man stories. So the character has had numerous romances in the comics. As any casual Spider-Man fan will tell you, not all of them could impress fans.

In fact, a lot of them, like Betty Brant, came and went. But some, like Gwen Stacy, became a cornerstone of Spider-Man lore and comics for decades. Such romantic interests still have a vice grip over Peter Parker’s heart.

So of course, when there’s a live-action adaptation of the character, the romance aspect will come through. In the Marvel Cinematic Universe, Peter Parker’s first love was in Spider-Man: Homecoming with Laura Harrier’s Liz Toomes.

However, as we all know, that didn’t work out. But thankfully, Holland’s Peter Parker could find love with Zendaya’s Michelle “MJ” Jones in the next movie, Spider-Man: Far From Home. Even though Peter’s identity was outed in Spider-Man: No Way Home, the young couple in love still made it work.

However, their story ended in heartbreak. MJ, along with everyone else in Peter Parker’s life, was made to forget that he existed because of Doctor Strange’s spell.

One of the last shots is of the movie of Peter Parker, all alone, in his new apartment, working on his GED and swinging as Spidey one final time in the movie.

Irrespective of your feelings about the MCU Spidey trilogy, it’s pretty clear that Spider-Man won’t be without a girlfriend forever. It just won’t work. So now fans are pondering, who will be Peter Parker’s next love interest?

We have some ideas we would like to present to you:

Will Marvel Studios bring Mary Jane Watson into the MCU when it has been established that their version of Mary Jane is Zendaya’s MJ? We don’t think so. This is especially true because Spider-Man: No Way Home doubly confirms that Zendaya’s Michelle Jones is the actual Mary Jane of this universe.

So if you are hoping for another Mary Jane Watson to show up in the MCU, then you will have to live with disappointment. Also, we heard Tobey Maguire’s Peter Parker mention his Mary Jane. So Holland’s Peter will probably not get into a relationship with anyone who has those initials.

Logically, the next choice for a love interest is Gwen Stacy. But she hasn’t yet shown up in the MCU, and no one is sure if Parker’s first true love from Marvel comics will ever be seen in the MCU.

This is because Marvel Studios President Kevin Feige doesn’t like repeating things that have already been done and done well. In an interview, he said that Green Goblin and Doc Ock were never brought into the MCU before No Way Home because he didn’t believe that anyone other than Willem Dafoe and Alfred Molina could do them justice.

Similarly, no matter your opinion on the two Amazing Spider-Man movies, Emma Stone (along with Andrew Garfield) was loved by fans for her portrayal of Gwen Stacy. Many consider it one of the shining spots in The Amazing Spider-Man films.

So it’s possible that Feige doesn’t want to repeat that relationship and bring unnecessary comparisons to it, or even try to undermine Andrew Garfield’s Spidey franchise in any way.

So if Holland’s Peter doesn’t hook up with anyone who has the initials MJ (other than Zendaya’s MJ), he will also probably avoid getting together with someone called Gwen, since Garfield’s Spidey mentioned that he wasn’t able to save her.

Obviously, Peter will try to avoid another heartache by falling in love with someone who he knows can die. Also, it needs to be mentioned that Andrew’s Peter got redemption and closure for not being able to save Gwen in this movie.

So there’s no use retreading that storyline. Not to mention that introducing Gwen Stacy here would probably close some doors for a third The Amazing Spider-Man movie.

Finally, it sort of seemed like Marvel Studios made it clear that they wouldn’t ever adapt Gwen Stacy because Angourie Rice’s Betty Brant looked pretty identical to the love interest we love.

Also, it would cheapen the heartbreaking ending of No Way Home. However, it certainly wouldn’t be the first time that the MCU would have done something like this with their Spider-Man.

In Spider-Man: Homecoming, there was a confrontation set up between Aunt May and Peter after she found out about his secret. This is a pivotal moment in comics.

But this was resolved off-screen, and then by the time Far From Home happened, Aunt May seemed ecstatic that Peter was now a superhero.

Also, Peter getting framed for Mysterio’s murder at the tail end of that same sequel was conveniently swept under the rug within the initial 20 minutes of Spider-Man: No Way Home.

So it’s possible that Peter Parker could in fact get together with MJ again by the time the next Trilogy begins. But this would cripple the tragic setup of No Way Home.

However, we don’t think that the MCU will take such a glaring misstep about their main Spider-Man couple. Peter will probably be loveless, and in Boston when we see him next time. He and Ned will probably be at MIT as well.

As we said in the introductory part of this article, there are decades of Spidey comics with romance, and this means that Peter has had many girlfriends over the decades. But they didn’t last long.

Many of them acted as temporary romantic partners until Peter eventually rekindled his romantic relationship with Mary Jane Watson (or she came back from being dead because of the comics, you know?).

The list of such temporary girlfriends is long and includes names like Michele Gonzales, Carlie Ellen Cooper, Cissy Ironwood, Caryn Earle, and even Jill Stacy (Gwen’s cousin). However, we know that most Spider-Man fans probably haven’t even heard of these names.

But they can function well s a love interest for one movie before Zendaya’s MJ eventually returns to Peter’s life. This is because there are only a few love interests in Peter’s life who have made a mark on him. So barring a few, most are interchangeable.

But there is one love interest who does stand out among them, and that is Debra Whitman. But these are not for the reasons one would expect. 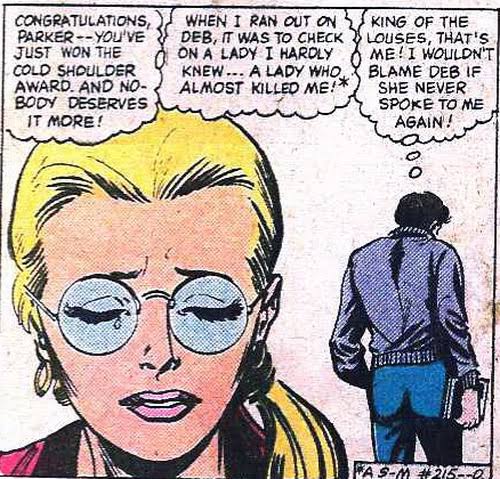 In the pages of Marvel comics, Peter Parker went to Empire State University. This is where Tom Holland’s version will probably also be studied in the next trilogy.

While there, Peter met several characters who became a part of his main cast like Gwen Stacy, Harry Osborn, and Debra Whitman. Debra was a secretary in the university’s biophysics department. Whitman was unique among the endless list of Peter’s love interests because she was pretty much a doormat.

She was unlike Peter’s other girlfriends, who were more confrontational and ready to call him out on his shortcomings and mistakes as a partner. So you might have guessed where this is going.

Since Debra was a doormat, Peter Parker turned out to be quite a terrible partner to her. In fact, she’s probably the worst he has ever treated out of any of his other love interests.

Parker constantly abandoned their dates to do his duty as Spider-Man. He would put her life in danger due to his other superhero life, and she very nearly had a breakdown over the belief that Peter and Spider-Man were the same people before they broke up.

In No Way Home, Strange cast a spell that caused everyone to forget not just the fact that Peter Parker was Spider-Man, but also Peter Parker entirely. But what if the magician’s spell didn’t fully work on everyone? Or what if its effects start gradually fading?

Over time, it will be interesting to see if the spell had any other potential repercussions. Or maybe Peter will have to deal with a relationship gradually deepening and the girlfriend getting closer to his secret before regretfully breaking it off.

After Debra Whitman went out of Peter’s life and left New York, he met a really mischievous cat lady.

With the path that the MCU is taking for Spider-Man, there truly is no better time for introducing Black Cat. Felicia Hardy/ Black Cat is a criminal. Now, as far as being a love interest for Peter goes, she was never in love with Peter Parker.

Felicia was just attracted to Spider-Man, his superhero persona. When Peter tried to deepen the connection between him and Felicia by revealing his secret identity to her, she yelled at him to put on his mask again.

But over time in the comics, Hardy’s mindset did soften, and she began to fall for Peter Parker as well. But she would still find Peter’s life as Spider-Man more appealing, especially since Black Cat lived her own extraordinary life.

So after everything the MCU’s Peter has lost, he would welcome someone who didn’t give a hint about his secret identity. He would want a romantic partner from whom he wouldn’t need to keep secrets.

Also, he would want someone who could keep herself relatively safe from the problems and dangers of his superhero life. Basically, she should be able to look after herself. So Felicia is perfect as Peter’s next romantic interest due for these reasons.

But gradually, Peter would want more from Felicia, and she might not be willing to give that up. But that is the appeal of Black Cat as the romantic lead of the next trilogy. Peter would try to break down her barriers but wouldn’t be able to.

So there is no better time than the next Spidey trilogy to introduce Black Cat and make sure that she makes a proper live-action debut. The character would work amazingly well with Peter, who is currently at rock bottom in a way after losing all of his loved ones.

It was also heavily implied at the end that he would eventually run into Symbiote and get his black suit. This is the suit that he often wore when he was with the iconic burglar.

But for now, we will have to wait and see where Kevin Feige takes the next Spider-Man trilogy. In the meantime, you can check out Spider-Man: No Way Home, which is still in theaters.

You might also like: Spider-Man 4’s Producer Says There Will Be More “Emotion” In The Tom Holland Sequel