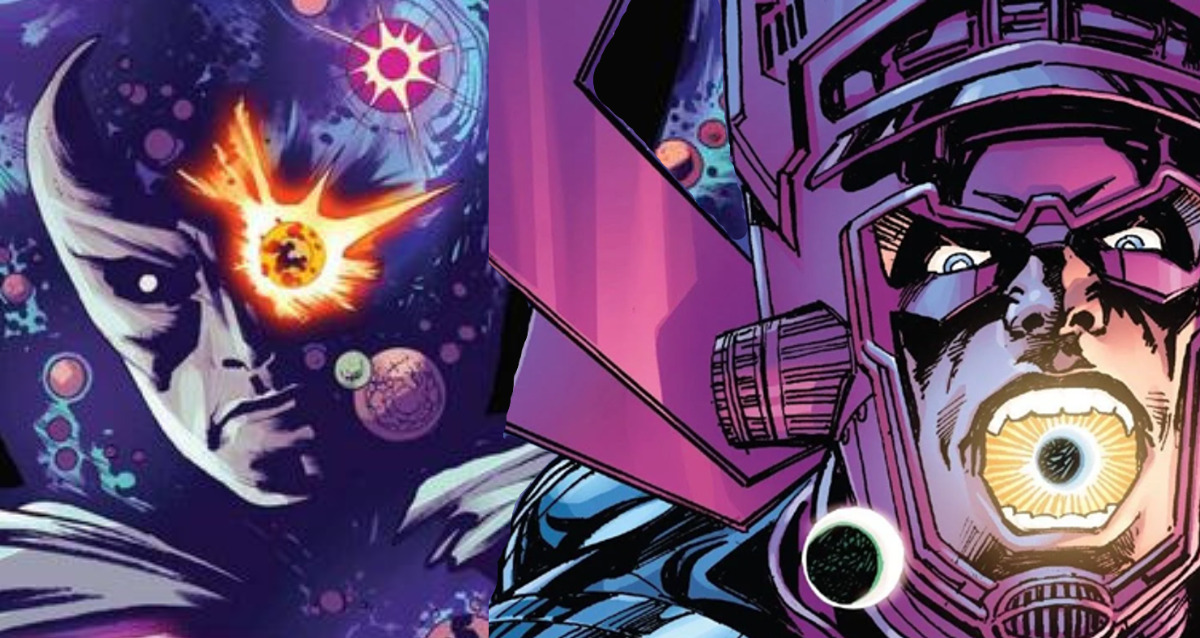 Galactus is the Devourer of Worlds. He is one of the most powerful entities in the Marvel Universe both in the comics and in the MCU. There are only a few other entities or rather cosmic beings who are stronger than him. One of them is Eternity. MCU fans have definitely heard of Eternity especially now that Thor: Love and Thunder has been released on Disney+ as well. Eternity was the being who granted Gorr’s wish of bringing back his dead daughter, Love. 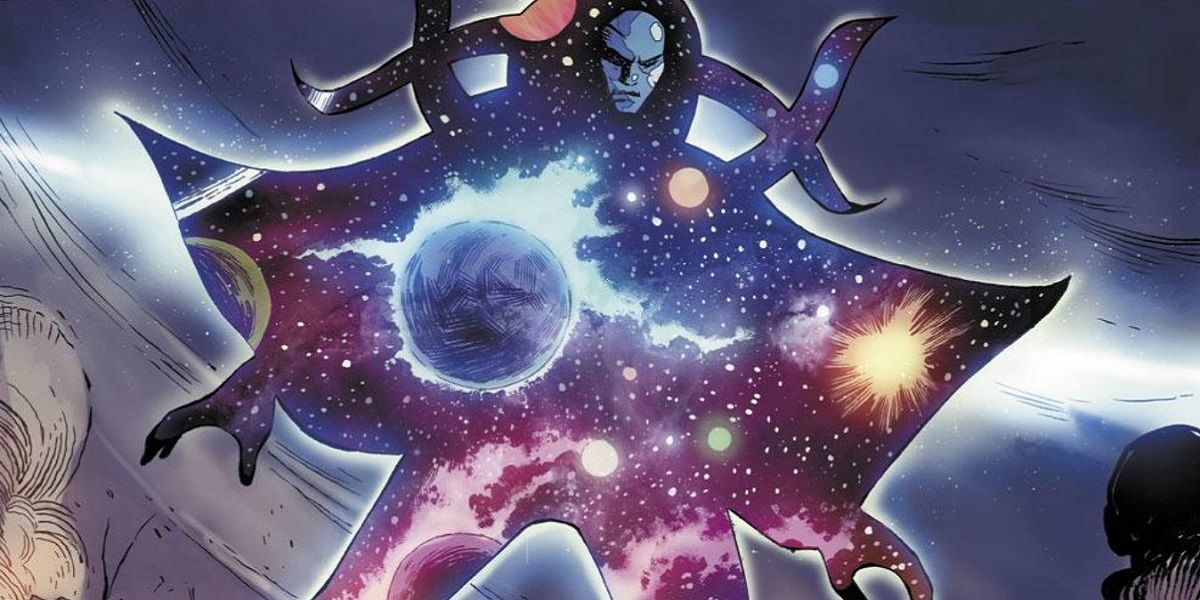 Eternity is a cosmic being who would literally defeat Galactus within seconds. Yes, he’s that powerful. He first appeared in Strange Tales #138 by Stan Lee, Jack Kirby, and John Severin. He is literally the anthropomorphic embodiment of the Marvel Universe. This means that Eternity is a sum total of all life and all things that exist in the universe itself which essentially makes him Galactus’ “father”. He is also the personification of time.

In fact, the only powers greater than Eternity is The Living Tribunal and the One-Above-All. He has also given rise to several offspring who were also concepts such as Empathy, Eulogy, Expediency, Entropy, Epiphany, Enmity, and Eon. Furthermore, he could morph into a human form when required although he did it only on rare occasions during threats to the universe. He did so once to help Doctor Strange defeat Dormammu. He is omnipresent throughout Earth-616 and there’s an eternity at the center of every Universe.

All of his powers 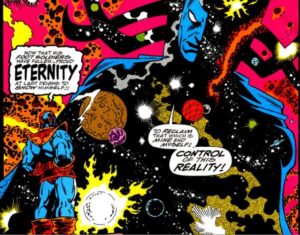 Eternity represents all time in the universe, and has unlimited ability to manipulate time, space, matter, energy, or reality. He is nigh omnipotent and omniscient. He stands above all other abstract entities such as Master Order, Lord Chaos, Sire Hate, Mistress Love and many others. Moreover, he can manifest into any living force on Earth. As seen in Thor: Love and Thunder he resides at the center of the very universe and can only be accessed through the Gates of Eternity. The Gates could only be opened by the Bifrost which was its key. The first person to reach him would be granted a wish. Moreover, the wish could be absolutely anything. Eternity could bring back the dead and even kill every single God in the entire Universe in one go and within seconds. 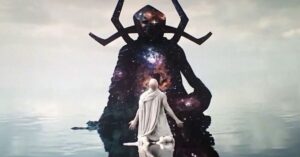 Gorr asks for his wish

In fact, he was one of the entities who was responsible for the creation of the Infinity Stones. The other entities were Entropy, Infinity and Death. The temple vault on Morag which housed the Orb containing the Power Stone, had a mural of Eternity and the other entities. He is obviously also immortal. He can also bestow magical powers as he did with Love when she was born with the powers of a God. 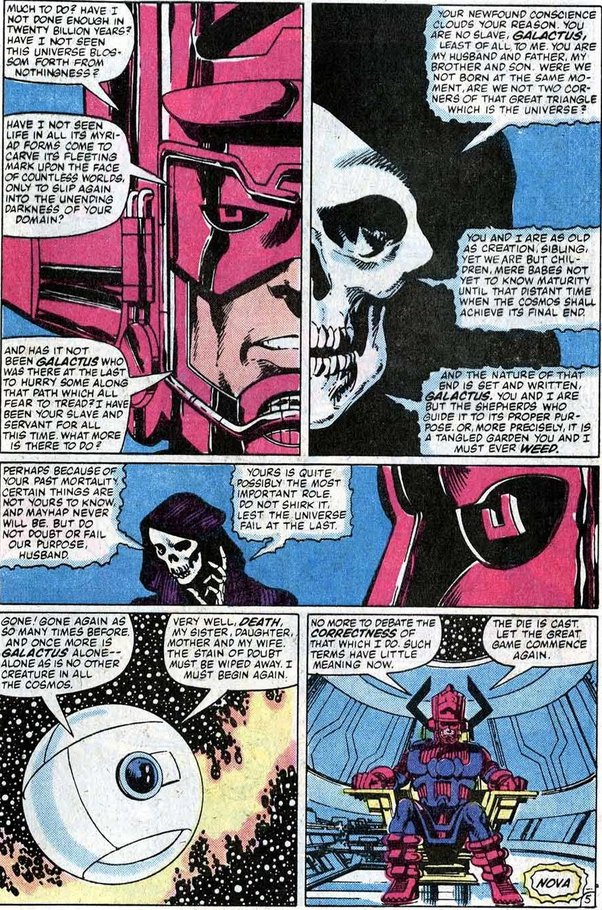 Eternity and Galactus do not have any reason to go against each other and have even come to one another’s aid before in the comics. This was during the trial of Mr. Fantastic. Galactus and the Watcher together had summoned Eternity. He then then allowed millions of alien onlookers to momentarily become one with the universe so that they could understand that Galactus was part of the natural order of the universe. In fact, Galactus is often called the Third Force of the Universe between Eternity and Death. His purpose was to balance life and death thus keeping the cosmic entities of Eternity and Death from each becoming more powerful than the other. In this way, Galactus generally exists to Eternity’s benefit.

However, if we were to pit the two against each other Eternity would definitely come out on top. To be brutally honest, Galactus doesn’t hold a candle to him. In fact, when Thanos first gained the Infinity Gauntlet and managed to acquire all 6 infinity stones, Eternity was the last being to stand between him and omnipotence. The only equal to him is his sister counterpart known as Infinity. Galactus is more powerful than most of the celestials and they will team up to fight him. He is a incredible force in the cosmic pantheon. But Eternity is the very personification of the universe. He has also defeated Death and that too quite easily.