MCU has definitely been exploring its darker side with its last few installations including Multiverse of Madness. Marvel is also developing a Marvel Zombies project on Disney+. This would include zombie versions of your favourite characters including Colonel America and a Spider-Man who ate both Aunt May and his wife Mary Jane. However, there is still a darker reality that the MCU can explore. That is the Cancerverse.

What is the Cancerverse?

Cancerverse is the dark and unfortunate reality of Earth-10011. In this reality, life had defeated death. The Many Angled Ones fueled eternal life and entirely corrupted this reality. The corruption started with the death of Marv-Vell as he suffered from cancer. As Captain Marvel succumbed to his illness, the Many Angled Ones sensed the massive amounts of empathy and sorrow felt by the universe that so loved him. So they went to him and offered him a way out. They told Mar-Vell that even death could be defeated. Even Death may die. These entities bestowed upon Mar-Vell the power to kill death. A distraught and desperate Captain Marvel thus corrupted the Avengers, Defenders, X-Men and the Fantastic Four.

Lord Mar-Vell from the Cancerverse

Subsequently, all the heroes together carried out a ritual know as the Necropsy. By this ritual they could sacrifice the Avatar of Death and thus vanquish Death itself on the spacecraft known as Sanctuary.This allowed the Many Angled Ones to take complete control over the world and fully influence it. The heroes became enslaved and started worshipping them. Thus, they gave the heroes gifts of power and transformed them demons with their ancient powers and abilities. The Many Angled Ones even killed and decapitated Galactus.

Eventually a fault was created accidently due to the explosion of the T-Bomb or Terrigen bomb during a fight between Black-Bolt and the Vulcans in Earth-616. This opened up a gateway between the Cancerverse reality and Earth-616. 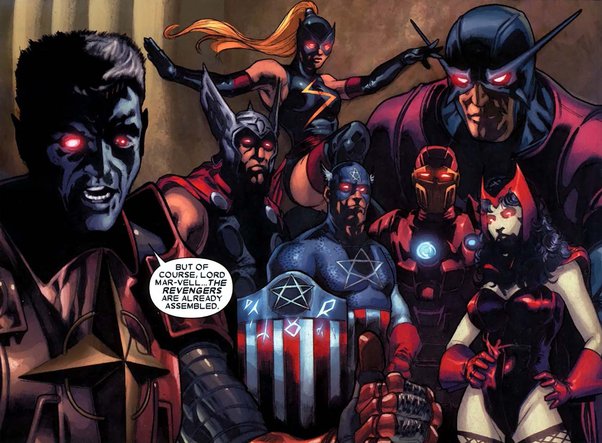 The Avengers became the Revengers after their corruption at the hands of Captain Marvel and the Many Angled Ones. Similarly, the X-Men became Ex-Men and Fantastic Four became Ftaghn Four. The so called heroes of the Cancerverse, specifically the Revengers invaded Earth-616 taking advantage of the fault that was created. This attack was led by none other than Mar-Vell on behalf of the Many Angled Ones. 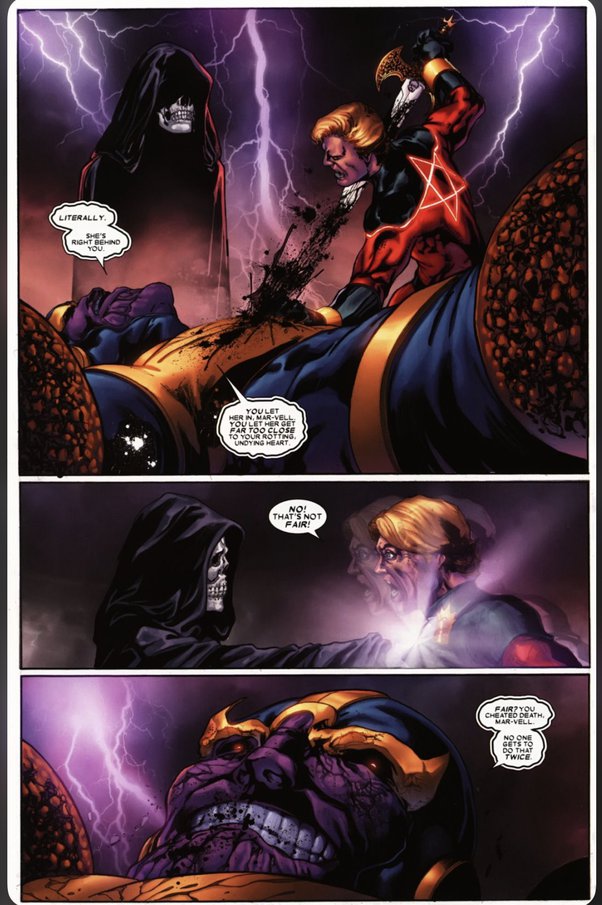 Thanos summons Death to the Cancerverse

In Earth-616 Thanos was the Avatar of death. He along with the Guardians of the Galaxy had entered the Cancerverse to fight off that reality. Thus, the Revengers and Mar-Vell went to take on Thanos and even managed to kill him. However this summoned Death herself into the Cancerverse. She then went on a rampage although unsuccessfully. This was because the Death of Earth-616 could not affect the Cancerverse. In this way the Revengers kept returning and could not be vanquished. But they were sent away from Earth-616 as it was saved from getting corrupted. Funnily enough the Captain America of Cancerverse never said Avengers Assemble. Instead, he said Revengers Dismember!

There have been many easter eggs regarding the Cancerverse already in the MCU. In the comic books, the operation designed to learn more about the Fault, the portal to the Multiverse, is known as Project PEGASUS. A project with the same name was undertaken in the MCU as well. The difference is that in the MCU it is used to explore the Tesseract. What’s even more interesting is that the project was led by Wendy Lawson, the MCU’s Mar-Vell, who happens to be arguably  the most important character in the Cancerverse reality.

Furthermore, the base of operations of project PEGASUS was Knowhere. Planet Knowhere has also been shown in the MCU on several accounts as it houses the Collector’s Museum. The name Revengers has also been referenced in the MCU during Thor: Ragnarok. The only question is that since Thanos in the MCU is already dead, who exactly is the Avatar of Death? The MCU could very well use this opportunity to bring back Hela as the Avatar. Either way, the Cancerverse should definitely be explored in the MCU as it would give the fans such an interesting perspective on their beloved heroes.